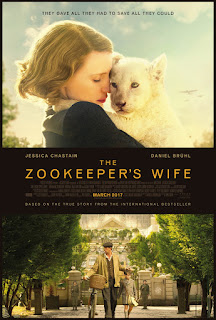 The film opens on a sunny morning with Antonina (Chastain) on a bicycle riding through the Warsaw zoo, happily greeting the animals owned by her and her husband Jan (Heldenbergh).  It’s obvious she has a natural way of connecting with them, and when they respond, they seem very human-like.  She holds them, pats them and kisses them, and when there’s a medical emergency, she’s right there helping to make things right again. The Zabinskis actually live in the zoo with their young son and an assortment of animals.
But it’s 1939, and the idyll will not last, for the Germans have decided to invade Poland.  Bombs start dropping on the zoo, killing many of the animals and barely missing Antonina and her son out on a balcony.  Jan wants Antonina to leave the city, but she refuses, actually wanting instead to have her best friend (who is Jewish) hidden in their villa.
Before long, they are visited by a German officer, Lutz Heck (Brühl).  Being a zoologist, he is sympathetic to their plight, informing them that the German leadership wants to use the zoo for their headquarters, so most of the animals must be killed.  He has toured the zoo and realizes that among the animals are exotic species.  He offers to take these to Germany and house them until the war is over.  His stake in it is that he does genetic research and wants to bring back an extinct species through breeding.  Antonina’s husband is away, but being a canny woman, she agrees to the plan, wanting to stay on his good side to protect themselves and what they have.
Further, the couple proposes to Lutz that they open a pig farm, which would provide food for the German troops.  The plan is submitted to Goebbels in Germany, and upon his approval, pigs are indeed shipped in.  Unbeknownst to Lutz, the Zabinskis will use the farm to rescue and shelter Jews imprisoned in the Jewish Ghetto in Warsaw.
This fascinating (and almost unbelievable) account is based on a true story written by Diane Ackerman who drew her information from the unpublished diary of Antonina Zabinski.  Angela Workman turned it into a screenplay for the film directed by New Zealander Niki Caro (North Country, Whale Rider).  When WWII films about civilians are as imaginative and eye-catching as this one, it shines a light on the ingenious ways people caught up in some kind of horror survive.  In this case, Antonina and Jan form an effective couple—one using political skill, and the other using his compassion as motivation to act.
Although not a Meryl Streep in the accent department, Chastain does a reasonable job in speaking English with a Polish accent.  In a way, she is in the same boat as her co-lead Heldenbergh who is from Belgium, although as a European he probably speaks several languages.  Nevertheless, Chastain plays her role to the hilt, needing to charm animals and humans in equal measure.
I found The Zookeeper’s Wife to be a moving account, not only as a reminder to us (we have so many freedoms) of a significant time in history when freedoms were revoked, but as well a warning about how maintaining freedom is an ongoing effort that needs to be nurtured.

The effects of war on ordinary men, women, and children—and even animals—is patently clear in this film, along with imaginative ways to circumvent its damage.

Posted by donnarcopeland at 6:34 PM