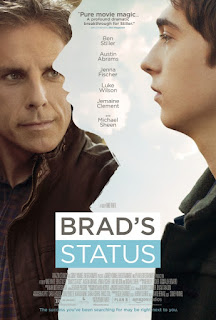 Brad (Stiller) is having a very bad time as he and his son Troy (Abrams) go visiting university prospects.  It brings to Brad’s mind his own college days, his beloved mentor, and four close buddies.  As he reminisces, he becomes more and more agitated, comparing himself and his life to his imaginings about his friends’ lives.  It seems that they have all been more successful than he (he’s focusing solely on the financial aspects), although he has a happy marriage and his son is looking at top-notch colleges.
This part of the film is difficult to sit through because Brad’s self-preoccupation and competitiveness keep us from empathizing with what he is going through.  But this is also where writer-director Mike White’s insight and perception into the human mind and his social sensitivities make his films (e.g., The Good Girl, Beatriz at Dinner) a step above so many.  Across the course of the film, Brad will have a number of illuminating conversations that will help him resolve his midlife crisis.
Each conversation is very different, but always on the right track and relieving to us as characters say to Brad what we would like to.  Two surprising ones are the encounters he has with his son’s young friend Ananya (Raja).  She is not cruel, but to the point in giving him feedback about himself.  “You still think the world was made for you.”  Then she goes on to talk about white privilege and male privilege, and how fortunate Brad is to have what he does.  His other conversations are with his college buddies, Craig (Sheen), Billy (Clement), and Jason (Wilson) in which he gets status updates on their lives.  A much anticipated dinner with Craig fills him in on the other friend, Mike (White in his own cameo).
I like that Brad is not portrayed simply as a wienie; he has a successful company, is able to use his connections to help Troy make up for a missed appointment, and stands up to his principles in the final conversation.  He seems to have made a turn-around by the end of the film.  He does remind me of Doug (John Lithgow) in Beatriz at Dinner; privileged and annoying at times, but not a really bad person; in fact, Brad’s rapid changes show a strong character with values underneath.
This is probably one of Stiller’s best performances, and the rapport between him and Abrams as his son and Jenna Fischer as his wife is optimal.  Brief appearances by Sheen, Clement, Wilson, and White add richness and heighten interest; and Shazi Raja is so good, I expect a bright future ahead for her.  Music by Mark Mothersbaugh and cinematography by Xavier Grobet reflect their talents and experience as artists.

A painful but ultimately rewarding trip into the mind of a man having a midlife crisis.

Grade:  B+ By Donna R. Copeland

Posted by donnarcopeland at 10:51 AM