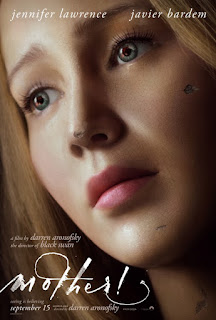 mother! could be seen as an allegory, one about an artist’s insatiable need for love and admiration.  The story begins in an ordinary way, with a young couple, played by Jennifer Lawrence and Javier Bardem (they’re never given names, nor are any of the characters, making it seem even more like an allegory), living in what looks like an idyllic setting, a romantic old house belonging to his family they are refurbishing—well, actually she’s refurbishing it; he is a serious poet with strict boundaries around his writing room.
Home invasion #1 occurs when a man (Harris) suddenly appears at the door, and the poet invites him in, clearly delighting in what he says about the poet’s work.  Sometime after, another visitor arrives, and she turns out to be the man’s wife (Pfeiffer).  Ignoring his wife’s cautions, the poet magnanimously tells them they can stay as long as they please, also ignoring their sense of entitlement and bad behavior as guests.  After two sons of the guests (B Gleeson and D Gleeson) arrive, the family has a major dispute about a will that devolves into a trip to the hospital for one of them.
After these guests leave, the poet and his wife have a period of blissful retreat, during which she gets pregnant and he finishes a major work.  She is so happy and hopeful, and he seems genuinely pleased.  Then home invasion #2 occurs after his book is published; hordes of fans, along with the publisher (Wiig) arrive to celebrate.  The mayhem is captured in many scenes to come.
All the while, the house gives off creepy sounds and groans as if it were a character itself; blood stains appear and travel/transform with pungent meaning.  Occult signs and portents are everywhere.  Aronofsky seems to be making a major point about stardom and fandom, how they feed off one another, and how they can go out of control.
I’m a fan of Aranofsky, and like the idea of showing so graphically how artist and fan are so reciprocal, how the artist can be seduced at whatever cost, and how the mob mentality of fans seems to have no limits.  But in this film, I think he went over the top in prolonging the invasion scenes so that they take over the movie.  This gets tedious very quickly.  I did get a huge kick out of seeing the fans literally interpret the poet’s words to mean that when he says “share”, that entitles them to have what is his.
Clearly, Jennifer Lawrence and Javier Bardem pulled out all the stops in their performances.  And Ed Harris and Michelle Pfeiffer, with their relatives (the Gleesons), are able to add a touch of the comedic to offset the horrors.  I wish Wiig’s appearances had been highlighted more, as she is so camera-grabbing in the brief times we see her.

Ah, yes, one of the successful artist’s challenges is managing fandom.

Posted by donnarcopeland at 10:10 AM