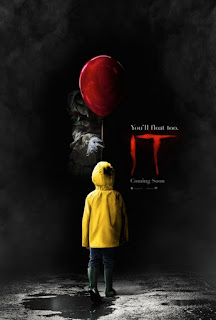 Stephen King is particularly skillful in his portrayal of characters with dimension and flair, yet always plausible and believable.  He must study humans constantly and draw on a wealth of information about us that he has collected through the years.   For example, in this film, the main character has a keen sense of responsibility and fairness…and a stutter.  Another is chubby and socially awkward…but very bright and rather nerdy in a charming way.  He has acquired an impressive amount of information about the town of Derry, Maine, that will inform his newly found friends.  King goes against stereotyping his people, and always adds something unusual, some special quirk or talent that gets manifested during the story unfolding.  Girls can be sexy and fight well and keep up with the boys.  Boys can be leaders, but also show fear and tears.  These touches constitute little surprises for the viewer, enhancing interest, and fostering attachment to the characters.  It’s not long before we know the characters and have an investment in them.  Certainly the horror aspects of his stories do that as well, but for someone like this reviewer who is not a horror fan, the added dimensions are special treats.
This story begins with two brothers, Bill (Lieberher) and Georgie (Scott), who have great affection for one another.  Bill the older makes a boat for Georgie to take out to “sea” in the rainy street.  After Georgie encounters a clown in a storm drain, he, like many others in a recurring cycle of 27 years, disappears.  He is not the first one this year, but typical of many communities, residents seem to be rather apathetic about what should be an alarming situation—at least that’s so of the adults; the kids express real fear about it as much as the local bullies.  And Bill is particularly motivated to do something because of his missing younger brother, as is Beverly (Lillis), who is deeply compassionate and has her own threat to deal with at home.  The others in the tight group friends are more ambivalent for various reasons, but can always be counted on to join crime-solving/prevention efforts.
Horror elements that the kids encounter include not only the hideous, fanged clown Pennywise, beautifully played by Skarsgard, but a leper, a headless man, and writhing tortured figures/heads as well that may cry out with advice like “Kill him”, “Kill them all.”  Blood is ubiquitous, and sometimes spells out, “You die if you try.”  There are supernatural events, identity switches, heartless town bullies, and gruesome bathroom scenes (which, one character points out, is the most dangerous room in the house).  Few adults are encountered, and when they do appear, they’re useless at best and abusive at worst.  Parents are so bad that when the kids rebel against them, one wants to cheer.
Director Andy Muschietti and Cinematographer Chung-hoon Chung artfully bring to life King’s well-told story of suspense, the supernatural, high drama, and repellant forces working against the good and innocent.  The clown’s showing something that looked like a shark’s mouth is off-putting in a mixed metaphor kind of way.  The children’s roles and the actors filling them give children credit where it is due.  Lieberher (St. Vincent, Midnight Special) as the star, Lillis as the “against-type” girl, and Skarsgard as Clown Pennywise use their considerable talents to embody their characters with powerful delivery.  Supporting cast should be acknowledged as well, particularly Taylor, as endearing and scholarly Ben, and Grazer, as asthmatic Eddie who wises up to a hypochondriacal mother.
I applaud the messages implicit in It about overcoming fears and working together to achieve great things.  The movie is entertaining, suspenseful, wryly humorous, and uplifting.

Stephen King’s much scarier version of a Scooby Doo story where kids solve a mystery.  Pennywise the clown:  “…if it weren’t for those meddling kids!”