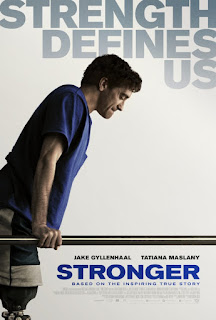 David Gordon Green knows how to tell a story that gets to the heart of the common man—and of those who surround him during significant events in his life.  In Stronger, he captures not only the spirit of Boston after the Boston Marathon bombing, he shows the arc of one of the accidental heroes of the moment, Jeff Bauman, heroically played by Jake Gyllenhaal.  Hopefully, award season will be Gyllenhaal’s long-overdue time to get the credits he deserves.  How many people have kept a sharp eye on him through all the 2,000’s?  I certainly have, and think his superb performances in Nightcrawler, Brokeback Mountain, Prisoners, Nocturnal Animals, and other major films make him deserving again this year.
In Stronger, Gyllenhaal plays a rather hapless guy who is trying to win back his girl by promoting her run in the Boston Marathon.  He and Erin (Maslany) have broken up several times before on account of his unreliability, smacking of a bipolar disorder.  He is late, doesn’t show up when he’s supposed to, etc.  And as is typical of him, he suddenly gets pumped when he discovers she is running in the Marathon and he wants to promote support for her.  He’s trying to win her back, and stands with a homemade sign about her on the finish line when the bombs start going off.
Jeff is a smart man, and as soon as he wakes up from the anesthesia following surgery on both legs, he lets the FBI know he saw one of the bombers and can give them a description, something that helped authorities in apprehending the perpetrators.
So at this point, we know something about Jeff and the woman he loves.  Next, we get a picture of what this kind of fame can do to a person of his makeup and his relationships.  He is surrounded by people who unwittingly want to satisfy their own frustrated aspirations through him.  This is especially true of his mother Patty (Richardson), who hasn’t had much of a life after divorce, except what she can hold onto with her brother and his family.  But beyond his family, even passersby who have seen his story on TV feel like they own a part of him.
Jeff is one of the least likely people who can manage the situation, much less use it to his advantage.  We see how the man tries to cope, see the admirably stalwart support he gets from Erin, and the complications his relationship with his mother presents.  This is Green’s strong suit—his presentation of very real, very flawed people who nonetheless deserve our love and support.  I appreciated so much his portrayal of Erin, a young woman who loves, forgives, and tries to cope with a situation that is thrown at her and not of her own making.  She seems to me to be as much a hero as Jeff.
This is a story about a hero that could go in many different ways.  Green has chosen to make it a real story about real people.  But he hasn’t limited it to Jeff and Erin.  We also hear about the man Carlos who rescued Jeff, also an unlikely hero who, after losing two sons manages to acquit himself.   Certainly, the direction and acting in this film is superb, but the cinematography by Sean Bobbitt and music by Michael Brook contribute significantly to the excellence of Stronger.

The story of an unlikely, unwilling hero and the complexities around him.