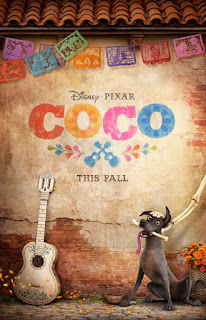 Disney/Pixar’s colorful, entertaining animation will delight children and adults, which I inferred while watching the screening and hearing the applause at the end.  Production design by Harley Jessup is rich in detail and captures Mexican lore about the land of the dead.  The story by Lee Unkrich and his fellow writers has emotional depth that is understandable to children and is meaningful for adults, and carries a strong message:  “Never underestimate the power of music.”  Michael Giacchino’s score fits the mood and culture perfectly, employing both vocal and instrumental numbers.  The film is reminiscent of Jorge Gutierrez’s and Guillermo del Toro’s The Book of Life.
The story is about young Miguel (Gonzalez) growing up in a multi-generation close-knit family that, for some reason, has forbidden music of any kind.  This presents a big problem for Miguel, in that music is “in his blood”, so to speak.  He feels a special kinship with Ernesto de la Cruz (Bratt), reportedly the most famous musician of the town, and aspires to carry on his tradition.  His family is horrified, but don’t explain, except to say that great grandmother’s father abandoned his family to go on the road and perform his music.  To support herself and her children, his wife began a successful shoe business, which everyone is expected to work in after they are grown, and forbids even the mention of music ever after.
In the meantime, on Dia de los Muertos (Day of the Dead), Miguel is accidently transported into the Land of the Dead, where he encounters some of his ancestors, as well as de la Cruz himself (who was killed by a huge bell crashing down upon him).  By this time, Miguel is convinced the man is his great great grandfather, and seeks his help in becoming a musician.  In the process, and through Miguel’s acquaintance with a kindly dead man named Hector (Bernal), he discovers the source of his family’s age-old tradition of rejecting music.  In the process, he also transcends his antagonism toward family, and comes to see the inestimable value of it.
This film is about staying connected with family in a positive way through photographs and by remembering and telling stories.  In the Mexican tradition, that is how the dead “stay alive” by living in the hearts and minds of the survivors.

This animation will transport you to the Land of the Dead and its mysterious, uplifting ways.