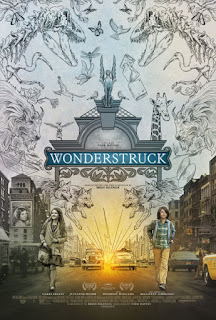 Unless you’ve read Brian Selznick’s work on which Todd Haynes based this film, plan to spend a fair amount of time trying to make sense of the plot and learning who the characters are.  Screenwriter Selznick actually does capture the model in his book in telling two different stories, one about a girl in 1927 and one about a boy in 1977.  I might say from the beginning that I’m not a fan of this model of storytelling; it takes more work than simply listening and seeing the story unfold.  Nevertheless, the book’s reviews are very positive, and most readers do find the exposition charming.
The film opens when Ben (Fegley) is having one of his nightmares, and his mother (Williams) comes in to comfort him.  The next thing we learn about Ben is that he has intense curiosity about his father, but his mother insists on withholding that information “until the right time.”  When she is never able to give it, Ben takes it upon himself to follow some clues he has about the father’s whereabouts, and proceeds to go find him.  Keep in mind that he is going to be traveling from Minnesota to New York City, and just recently became deaf, so he doesn’t know sign language or lip reading.
Ben’s story and that of Rose’s (Simmonds) are interwoven, hers in wordless black and white pictures from the 20’s, and the other in full color taking place in the ‘70’s.   There are numerous coincidental experiences each has, but the mystery of their connection is revealed only in the very last part of the film.  Rose is growing up in Hoboken, N.J., the child of divorced parents.  Her mother is a famous stage actress (Moore) in New York, but Rose lives with her father, a very stern, unemotional doctor who scolds her frequently.  She runs away to try to find her mother, despite the fact that she, like Ben, is deaf, and is mute as well.  The absence of sound in her story reflects not only the silent movies of the time, but as well her being born deaf and, consequently, mute.
The two young actors ably carry the bulk of the film, along with some fine help from Jaden Michael, who plays a friend Ben makes at the Museum of Natural History.  Fegley, proving his skills first in Pete’s Dragon and some other minor roles, is captivating here in his earnestness and persistence.  Millicent Simmonds is a worthy counterpart with her luminous, expressive face and eyes, playing a role about which she has had direct experience in her own deafness.  In Julianne Moore’s two roles, she expresses a sample of the range of her abilities.
Although I do regard Todd Haynes as a highly skilled director, I found some drawbacks in this production.  In addition to the fractured story-telling, it was difficult to follow sometimes simply because the notes that characters were writing to one another were presented to the audience so rapidly one didn’t have time to read them, and/or the they were dark or obscured by another object.  To me, it was an omission not to have shown Rose’s parents or Ben’s family trying to find out where they were.
Wonderstruck requires a certain amount of patience to sit through it, but if the viewer is impressed with Haynes earlier pictures such as Far From Heaven and I’m Not There; and Brian Selznick’s books (Hugo and Wonderstruck), this film is likely to be entertaining.

Two stories from the ‘20s and the ‘70s interweave to tell a story of remarkable coincidences.

Posted by donnarcopeland at 10:13 AM