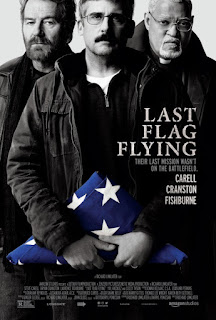 As is typical for Richard Linklater films, this one is packed full of a mix of humor, discussions/arguments about the government/war/military service, religion, personal responsibility, conflict resolution, expiation of guilt, and experiences of nostalgia and loss.  Three buddies in the armed services during the Viet Nam war meet up unexpectedly when the son of one of them is killed in Iraq during his service.  Larry “Doc” (Carell) is distraught and appeals to his friends to accompany him to bury his son in Arlington.  The three haven’t seen/heard from each other for years, and when Larry enters Sal’s (Cranston) bar, he has to remind Sal to look closely to recognize him.
The next day, they go to round up the third buddy who—to Sal’s horror—is now a minister.  Richard (Fishburne) has become as circumspect (sober, married, and reverent) as Sal is somewhat depraved (boozing, single, irreverent and atheistic).  Larry stands somewhere in between, and often serves as peacemaker between the other two.  Sal instantly agrees to go on the journey; whereas Larry has to be convinced.  His wife Ruth (Foster) is effective in appealing to his sense of responsibility and guilt.    This journey will be a meandering one for various reasons, and he and Sal will be at odds much of the time, which provides both entertainment and thought-provoking discussions.
All three actors are proficient in their very different roles, with Carell having perhaps the most challenging task.  His character is understandably and clearly depressed, but he has to show occasional spunk and wit and still play the grieving father, along with a mix of orderliness and bumbling.  Sal plays the executive role in making decisions, making things happen, but also has a mix of restlessness, blurting out whatever comes into his head, and asking impertinent questions, which actually becomes tiresome after awhile.  Fishburne’s character is someone who was as much a rabble-rouser in his younger days as Sal, but has sobered up and has developed strong Christian moral beliefs.  Cicely Tyson’s cameo role is golden in its poignancy.
Linklater is gifted in successfully blending so much meaningful content into a story (this one based on co-writer Darryl Ponicsan’s novel), while still maintaining a sense of humor and acceptance of human frailties. Cinematography by Shane F. Kelly, editing by Sandra Adair, and music by M. Graham Reynolds help make the story flow with a natural rhythm and pique interest in the material.  There are some scenes that seem irrelevant and bog down the picture, such as the cell phone store (although this was a time to poke fun at the geezers’ age gap) and Sunday dinner at the Minister’s house.
The film is timely in its treatment of the death of servicemen during war, the government’s ineptness at times in acknowledging and being truthful about the deaths and expressing gratitude to families for the loved one’s service.