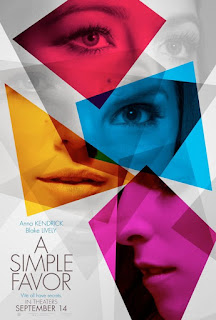 Ah yes, a simple favor indeed.  This comedic drama is fun to watch with all the baits and switches leading down one path and then another and with plenty of comedy that stays just short of slapstick.  The entertaining novel by Darcy Bell, on which Jessica Sharzer has based her screenplay, has been translated to the screen by the multi-talented director Paul Feig. It maintains the Gone Girl type of intrigue and suspense about a missing woman, with crafty plotting that keeps the viewer rapt in trying to figure out what is what and who is who.
But most ingenious is the casting of Anna Kendrick to be the naïve do-gooder/housewife-vlogger who ends up also being an astute detective and sly manipulator. We knew Kendrick could be funny, as in Drinking Buddies, and could show dramatic flair, as in Up in the Air; but her skill here in being an endearing figure you initially smile at but one who will eventually be a sharp-witted, rational plotter, and sexy is truly impressive.  Blake Lively is very much a counterpart foil playing the attractive, cold, bad girl who feels free to say and do anything she pleases.  When the two are onscreen together, sparks fly—sometimes in attraction, sometimes in competition. Clearly, the two actors are having fun with their acting skills in every scene.
The story begins in a grade school setting with Stephanie (Kendrick) being the stereotypical mom who is known for her cooking, crafts, and enthusiastic volunteering and, by the way, has her own vlog in which she cooks and throws out helpful hints and other thoughts about—anything.  When her son Miles (Satine) makes friends with Nicky (Ho), she and Nicky’s mother Emily (Lively) are drawn together, Stephanie to Emily’s worldliness (no rules, no “I’m sorry”s) and Emily to Stephanie’s innocence (“You’re so nice I don’t know how you’ve survived this long”).  As you would expect, Stephanie’s son is polite and well behaved, whereas Nicky is volatile and freely uses the f-word. Ian Ho’s acting-out role allows him to show his theatrical talent, which he does very convincingly.
The relationship between the two women is fascinating throughout in its mixture of mutual awe, admiration, wonderment, and daring.  This is the aspect of the film I appreciated the most. Both women represent the typical American woman with many layers and dimensionality in their personalities.  With his keen understanding of women, this drama is a perfect one for Paul Feig to direct.  We immediately recognize Stephanie, but we need background information about Emily to develop even a modicum of sympathy—and respect—for her. We get that with the well conceived script and story line.
A Simple Favor keeps going on and on until it becomes absurd toward the end, but it doesn’t lose any of its entertainment value even so.

A movie with laughs, intrigue, and thrills that will make you chuckle afterwards, even while you shake your head.