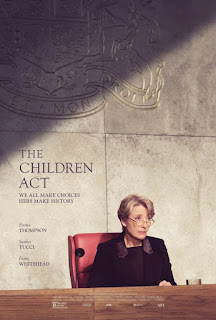 The Children Act, based on the great British writer Ian McEwan’s book and screenplay, weaves a beautifully moving story told in a unique way, exploring the agony and the depths of differing perspectives involved in critical decision-making.  It could be the basis for one of the ethics workshops we’re all being required to attend these days.  Hopefully, in such events, it will be pointed out how helpful good psychotherapy could have been for the characters in this drama.
The film stars the award-winning actress Emma Thompson as Milady (as female judges are referred to in Britain) Fiona Maye, a judge who must rule in difficult child cases using The Children Act, Britain’s guide for adjudicating in the interest of children.  We’re first told about a set of conjoined twins where the issue is to separate them or not.  Separation would mean that one would likely die, but not separating puts both lives in jeopardy.  I especially like that the film allows enough time for the audience to consider the arguments for and against in this and the following case.
The next case we hear about is that of Adam Henry (Whitehead), a teenager (not yet 18 years old) whose Jehovah’s Witness adherent parents want to deny him treatment that would involve transfusion of blood, strictly forbidden in that religion.  Without it, he is not only likely to die, but it would be a painful death.  We see once again that Judge Maye is sincerely considering all the arguments in a fair and reasoned way, with the law firmly in her mind.
In this instance, however, in her commitment to making a reasoned decision, she breaks precedent and goes to visit Adam in the hospital to determine for herself that he is not being unduly influenced by his parents or church elders.  She is caught off-guard by the young man, who is obviously flattered by her visit and responds eagerly to her probing questions, clearly affirming his belief in the religion.  Beyond that, he is a budding guitar player (four lessons so far!) who insists on demonstrating his delight in what he has learned to the judge, who, unbeknownst to him, is an accomplished pianist.  She vocalizes the Yeats poem he has played the notes for, and he is clearly inspired by her presence and her knowledge.
The visit is not entirely compliments and fun; when she asks Adam what he will think if she rules in the hospital’s favor, he quickly responds with “I would think Milady is an interfering busybody!” which brings a spontaneous, hearty laugh from her.
Little does Milady realize how much she has touched Adam—and he, her—and what will ensue as a result.  It will hit chords in her that have remained long dormant.  The story is not just about her cases, Fiona is going through a trying time in her marriage to Jack (Tucci).  It seems her supreme dedication to her work is bringing up other considerations for him.  He has been patient (in a completely endearing way) with her total commitment to her work, but now, even though he still loves her dearly, he wants something in exchange.  In the interactions between them that we see, it is clear that her priority is her work, and she expects to continue on with their life as it is.
Through all this, it’s remarkable how closed Fiona is to emotional pulls from her husband or from her new admirer.  This, of course, makes her emotionally vulnerable, and the two relationships, juxtaposed as they are, will have profound effects on her.  Compliments to writer McEwan; all of what transpires is not only engaging, but reflects true human conditions and beliefs.
Emma Thompson should be at the top of award lists this year for her performance in The Children Act; it’s demanding in its requirement for portraying a complex character with nuance and believability. Thompson hits every note and makes them vibrate in her hot and cold assessments of cases, her unexpected discovery of what ‘wild and free’ means, her genuine love for meaningful attachments, and her playfulness despite all the seriousness.  Stanley Tucci is a perfect foil for her character in his portrayal of a male who is loving but not useless (which some in the film complain about men in general, and might apply to some sentiments in today’s world), and one who is wise in matters of the heart.  Young Fionn Whitehead has earned some of his stripes in Christopher Nolan’s Dunkirk, and increases them here in his portrayal of a passionate teenager who knows his own mind. He made the character of Adam entirely believable and sympathetic.
Richard Eyre’s direction of this masterpiece in blending so many elements is spot-on, including the perfect backdrop of Stephen Warbeck’s piano music and Andrew Dunn’s cinematography capturing expressiveness in human faces and a range of interior and exterior spaces in which the action takes place.

This is a perfect movie in which to see the human complexities professionals in law and healthcare face in their day-to-day work, but it’s also a thoroughly engaging story.

Posted by donnarcopeland at 10:45 AM