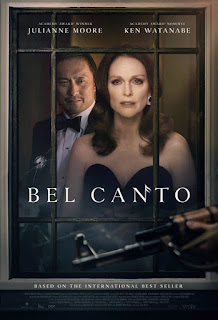 A well-known American opera singer, a wealthy Japanese businessman, and South American politics all get mixed up together in this tense drama when the singer, Roxane Cross (Moore) is invited to give a concert in an unspecified Latin American country in honor of businessman Katsumi Hosokawa (Watanabe).  They all arrive at Vice-President Ochoa’s mansion—Japanese translator Gen (Kase)—in tow, barely get settled in the ritzy hacienda, and Roxane is just beginning her concert, when they are rudely interrupted by a guerilla group aiming to kidnap President Masuda.  The problem is that the President preferred watching a telenovela at home, so he isn’t present.  In that case, the commandos say, they’ll just wait for the others to fetch him.
This begins a long stint of the hostages being trapped and in a panic, even if it is in an elegant mansion.  Not only are we privy to constant negotiations, but as happens in such situations, relationships begin to form.  Katsumi is an avid opera fan, particularly of Roxane, so much so that when he was invited to the country in the interest of his establishing a company there, he had the foresight (nerve?) to say he would come only if Roxane would agree to give a concert.  When the two meet, sparks fly, and he becomes fascinated by more than her art.  Another developing attraction emerges between translator Gen and one of the guerrillas, Carmen (Coroy), which is obviously risky for her.
My book club read Ann Patchett’s novel, Bel Canto, which we found to be an entertaining thriller, and I expected the movie to be just as appealing.  However, I found it to be lacking slightly in the thrill aspect.  Certainly the accidental killing of one of the hostages early on creates tension, and Roxane’s invitation to sing in order to calm down an escalating situation at one point is intriguing.  In addition, Moore and Watanabe are at their usual level of excellence, and the dubbing of the voice of Renee Fleming for Roxane was so good.  In addition, the romance between Gen and Carmen carries excitement and curiosity.  Yet, something was lacking.
Somehow, in the direction of Paul Weitz and the adaptation (Weitz and Anthony Weintraub), the story loses some of the “grab” of the novel.  I would guess that focusing more on the “romances” than on the negotiations is at fault.

Bel Canto the movie strives to match the power of the novel, but falls just a bit short.

Posted by donnarcopeland at 11:54 AM