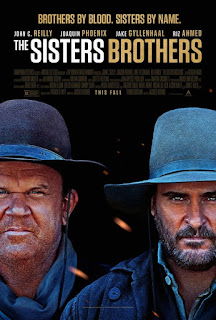 Intelligent western may be an oxymoron to some, but in this case, I think it fits. Director Jacques Adiard directed and co-wrote the screenplay with Thomas Bidegain, based on a novel by Patrick DeWitt.  That Adiard is French, and this is his first English language film, makes it even more impressive, because much of the content has wry humor, references, and interesting emotional connections that ring true for the American setting.
The film begins with a darkened picture that becomes punctuated with gunfire bursts seen in the dark, the galloping of horses, and finally a house coming into view, with gunmen killing everyone they see, apparently cold-heartedly (cinematographer Benoit Debie created this striking opening scene.)  The two gunmen doing the damage are Eli Sisters (Reilly) and his younger brother Charlie (Phoenix).  They work for The Commodore, whom we only get two glimpses of, who has vast international business operations he has to protect. At one point, there is a pertinent argument between the brothers as to whether the people they shot are victims vs. bad guys who have stolen from The Commodore.  This is just one example of the philosophical/social issues subtly discussed among characters.
Two other characters that will come in contact with the Sisters Brothers are an unlikely pair, in that one, Hermann Kermit Warm (Ahmed), is a chemist (who has a formula for extracting gold from California streams) and the other The Commodore’s effete detective, John Morris (Gyllenhaal), from an upper class background.  The latter has been charged with joining up with the Sisters Brothers to get the formula from the chemist—whatever it takes.  How he got into the job will come out later.
In introducing these four characters, Adiard plays with the well-known contrasts between the educated and people like the frontier-hardened, skilled sharp shooters.  Tidbits about their backgrounds are inserted from time to time, allowing a more detailed picture of them, in terms of who they are and how they got to where they are. Further information is gleaned from incidents and conversations that occur throughout the film so that, by the end, a plausible account of how this group of four men got together, their backgrounds and personal stories, and how they end up is made clear.
The four main actors are stunning in their portrayals of brothers and unlikely connections that are formed for expediencies of the moment.  John C. Reilly, Joaquin Phoenix, and Jake Gyllenhaal can always be relied upon to bring potency and flair to their characters.  Riz Ahmed meshes perfectly with these well-seasoned actors to, likely, assure him of a bright future.
The film was shot in Spain, but clearly looks like the American northwest. Debie’s cinematography transports the scenes to this country beautifully and convincingly.  Renowned Alexandre Desplat lives up to his reputation for capturing the essence of every scene with his music, and for his first western, he drew on strains of Charlie Mingus’ jazz and Nicholas Cage-type music.  I especially love his quiet piano accompaniment in emotionally charged segments; for instance, in a mother’s home.
This film has many strengths beyond those mentioned.  Elaborating further, the interactions between the two brothers bring into play sibling rivalry, father issues, family loyalty, and the roles the two have come to own, such as the older Eli feeling and taking responsibility for the younger Charlie, who is more impulsive, more outgoing, more assertive.  But true to life, caretaking roles are switched now and then.  John Morris and Hermann Kermit Warm come together in a conventional way, in the spark created in their first meeting, and then through conversations in which they discover they have shared views about the world and how they might achieve a common goal.
Another feature of the film that I appreciate is the way violence is portrayed in appealing to more artistic, sensitive tastes rather than eliciting shock through gore.  We are spared one shot and only see the body with a pool of blood on the floor.  Or it’s done in a kind of humorous way, such as an insect crawling inside a mouth and reproducing(!).

This is a film for those who relish creative productions that can incorporate a modern take on a beloved genre, and still sketch out three-dimensional characters that resonate with most people today.