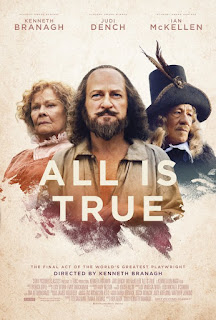 Not so much rings true (I don’t think) in this fantasy written by Ben Elton and directed by Kenneth Branagh—also its star—but it is interesting.  All is True deals with the period immediately following the fire that destroyed the Globe Theatre, primary venue for William Shakespeare’s plays. Immediately after, Shakespeare retired and never wrote any more.
The film shows Shakespeare (played by Branagh) returning home and planting a garden, although, admittedly, he was not very good at it.  In settling back in with his wife and two daughters—one of whom is married—Shakespeare is presented as being glad to be home, devoted to his family, and still grieving the loss of his son Hamnet at age 11.  In this drama, Hamnet’s twin, Judith (Wilder) reveals her own story of how the child died.
Most of the drama delves into the hypothesized dynamics of the Shakespeare family, in which William’s wife Anne (Judi Dench in predictably fine form) voices her resentment about his extended absences and other affections he has expressed in his poems.  She is cranky, but mostly forgiving.  His daughter Judith (Wilder) echoes her mother, but her complaints have an additional edge; she is convinced that her father values his dead son over his daughters, particularly her.  The Shakespeares’ daughter Susanna is married to a Puritanical physician, and it’s implied that he takes a self-righteous, accusatory stance on most issues.  The movie shows Judith eventually marrying after she and her father resolve their conflicts, although it is not under the best of circumstances.  All is True suggests that both daughters were involved in local scandals.
I found the film rather strange in its presumed knowledge of history and its attempts to be currently relevant.  For example, the film clearly conveys its respect for Shakespeare, but it also comes down hard on male privilege and upper class self-entitlements, as well as absent fathers out to make their mark on the world.
Not being a Shakespearean scholar, I was constantly wondering how much the film is based on historical fact.  Elton and Branagh include any number of hypothetical interactions and events that may veer far from the truth, however plausible they might be.  In this respect, I’m opposed to dramatic liberties taken by filmmakers who seem to go off on their own tangents, simply to entertain/thrill audiences.  On the other hand, if the screenwriter is a real scholar, and makes educated guesses about, say, how it was for Shakespeare to “come home”, I’m a bit more forgiving.
At any rate, for aficionados of the period and Shakespeare, the film is likely to be entertaining.  For those not particularly interested in historical details and atmosphere, you can skip it.

An unusual look at William Shakespeare and imagining his life in retirement.