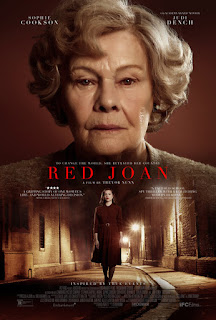 Red Joan is loosely based on the life of a British woman (Melita Norwood) who became a spy for the Russians in the 1930’s, and ultimately handed them critical information about the British atomic weapons project.  Her actions were not revealed publicly until the 1990’s, when she was 80, and the government decided not to prosecute because of her age.
The movie takes considerable liberties in adapting the story to the screen (Lindsay Shapero) showing, for instance, Joan (the younger played by Cookson and the older by Dench) being a student at Cambridge University, becoming involved with Communist sympathizers, and falling in love with Leo (Hughes), a German who becomes a spy for the Russians.  Leo disappears from time to time without explanation or communication, and she rebuffs his attempts to get her to give up the nature of the project she is working on (as a physicist in the British scientific weapons project, a counterpart to the U.S. Manhattan Project) numerous times, knowing she would be liable for treason after she had signed the oath required by the Official Secrets Act.
Director Trevor Nunn and screenwriter Shapero for some reason guided the story more like a soap opera plot, emphasizing Joan’s susceptibility to Leo, and cloaking it in a rationale that is actually different from the historical account.  Here, Joan’s infractions are attributed to her anti-war stance; she is horrified by the bombing of Japan and is convinced that if all the major powers had access to the atomic bomb, it would result in a détente—which the movie implies actually happened.  (The real “Joan”, Melita Norwood, stated her rationale as "I did what I did, not to make money, but to help prevent the defeat of a new system which had, at great cost, given ordinary people food and fares which they could afford, a good education and a health service" (https://en.wikipedia.org/wiki/Melita_Norwood).
As part of the plot, Joan’s relationship with scientist Max Davis (Moore), who hires her as a secretary/scientist, gives the filmmakers an opportunity to show the discounting of women in important positions, but also another romantic twist to the story.
The movie can be faulted for making such a radical departure from actual people and events.  It calls into question filmmakers’ claims of authenticity when they purport to base their story on historical events and then alter significant relationships and events.
As it stands, the film is effective in eliciting sympathy for Joan, her claims of patriotism, her susceptibility to a charmer, and her rationale for doing what she did.  I just don’t know how much it actually jives with the real story.  I am much more interested in knowing more about the real story of a most reluctant spy than in a made-up story of a romance.

Judi Dench and Sophie Cookson play a reluctant spy at different ages, and while interesting, Red Joan fails to capture the true story on which the film is based.

Posted by donnarcopeland at 7:56 AM