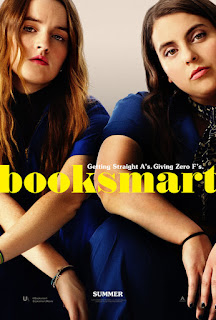 Take a peek at the generation coming up, just graduating from high school and finally developing perspective on where they’ve been and where they’re going.  Booksmart is something of a nerdy girl’s dream; one who is smart in book learning, but panicked to realize the night before high school graduation that she hasn’t lived.  She’s developed a slightly condescending attitude toward her classmates through the years, not realizing that some of them have been achieving just as much (i.e., headed for Harvard, Yale, etc.), but have been having fun and developing relationships all along.  She wants to salvage her life and is determined, even if she has only one night to do it.
The movie is meant to be a lighthearted window into the current younger generation (those of means, at least) with lifestyles that are self-indulgent, but not heartless.  Although there are scenes where the two main figures—the “nerds”—are characterized in unkind stereotypical ways, minds are changed when the girls loosen up and begin to mix with their classmates on a more even footing.  Some of this might be a little “pie-in-the sky” wishful thinking (most people with deep-seated impressions are not ordinarily so forgiving of those who are “different”), but it’s a good model for younger audiences to see how people can come together in permissive circumstances.
Beanie Feldstein as Molly and Kaitlin Dever as Amy hold their own as starring characters who are confronted with a whole new world right in their hometown before they take off for Botswana or wherever—parts unknown.  They show the girls sparring, arguing, and coalescing, solidifying a friendship that will last forever.  Feldstein in particular sensitively conveys subtle changes in her character that develop as she gains insight.
New director/accomplished actress Olivia Wilde is backed up by an all-female writing team (Susanna Fogel, Emily Halpern, Sarah Haskins, Katie Silberman) in portraying diversity in an appealing light.  Tolerance is paramount here in going against your usual prejudices about intelligence, gender, and race—um…maybe not so much, class.  But there is a forgiving attitude throughout—especially with the hilarious Lisa Kudrow and Will Forte as Amy’s parents, but also other characters who change and forgive as they get more information. (Have you ever forgiven someone who vomited on you?)
Music by Dan Nakamura and cinematography by Jason McCormick do their job of integrating elements of the film together into a meaningful whole.

A great date night movie for the young at heart—with substance.

Posted by donnarcopeland at 11:16 AM