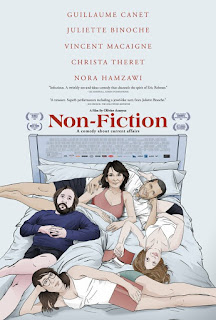 This French production by Olivier Assayas means to ponder the contemporary world of media (books, blogs, social networks, literature, art) to think about how the digital age has affected it for good or bad.   Different characters in the continual conversations we hear in the movie argue in different ways, but all acknowledge that the world is changing and leaving us all to wonder how cherished values and modes of communication will survive.
We first meet the suave Alain Danielson (Canet), head of a publishing company who holds a clear reverence for books, but is determined to stay ahead of the digital game in his field.  He has no trouble refusing to publish an old client/friend’s novel, yet eventually (after a brief fling with his “digital transition” assistant) endorses it as an e-book that he claims is bound to be popular.  Alain is married to Selena (Binoche), a classically trained actress now in popular movies and television who comments about the effects of her age on the roles she is being offered.  (Another evidence of sea change in these people’s world.)
The other prominent couple figuring in the drama are Leonard (Macaigne), a traditional novelist nonplussed by publisher Danielson declining his latest manuscript, and his wife, Valerie (Hamzawi), a political consultant.   Note that Leonard is having an affair with Selena, Alain’s wife.
The mostly open marriages (Selena does express some concern about her husband’s affair, even as she is having her own) seem to reflect Assayas’ fundamental thesis in the film, that as reluctant/resistant as we may be to change, we are rapidly being assimilated into the social/cultural changes that are taking place all around us.
Certainly, the concept of marriage has evolved to incorporate different combinations beyond one man and one woman, and extra-marital liaisons no longer hold the same stigma they once did.  But Assayas doesn’t skip over the anxiety we experience in these changes, even as we participate in them.  These anxieties extend beyond those closest to us, to beyond, to existential concerns related to art, the visual arts and literature,
The ongoing esoteric conversations among the intellectuals in the film will be completely lost on most viewers who will find them tedious and boring, which means that Non-Fictionis directed only toward those who might have an interest in ongoing cultural changes in our society and the effects the digital age will have upon it.  This is probably the most intellectualizing bed swapping you will ever encounter.
Both Guillaume Canet and Juliette Binoche are highly regarded as talented actors, and they electrify scenes they’re in.  But Vincent Macaigne and especially Nora Hamzawi provide excellent support.
Only the intellectually curious should apply/attend.

Posted by donnarcopeland at 3:28 PM