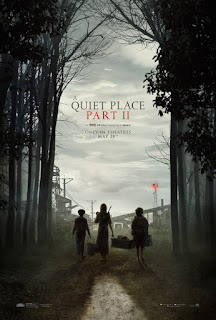 Part II follows along nicely from the first one, although I don’t think the first one really warranted a sequel.  The vignettes from the previous one were helpful.  And certainly the eeriness of the silence punctuated with loud squawking of the monsters is even more effective this time.  It produced a number of jumps and convulsive gasps on my part.

Evelyn (Blunt) and her three children are trying to survive after the destruction of their farmhouse.  The oldest, Regan (Simmonds) is deaf, but eminently resourceful and brave.  Poor Marcus (Jupe) gets his foot caught in a trap early on, giving him excruciating pain and risk of infection.  Not only that, he has asthma, which presents an additional challenge.  The baby is still an infant in his mother’s arms, and his cries are a major threat.  It stretches plausibility that their bundling him up in a box with oxygen pumped in could be effective, but…  I went with it.  (The monsters are blind, but their sense of hearing is acute; hence, the need for absolute silence.)

Mother and children run across an old friend, Emmett (Murphy) who is far from welcoming because of the scarcity of resources.  He is grieving the loss of his family, and Evelyn has to use guilt-inducing strategies even to stay one night.  The story gets more complicated when Regan insists on going to a place she is sure will save them and sneaks off, but Emily insists Emmett go find her and bring her back.  She also needs to go out to get medicine and oxygen for Marcus.  Each of these ventures are harrowing.

Some relief from the tension is provided when Regan’s speculations pan out, after she and Emmett meet a character played by Djimon Hounsou, but only after a dangerous encounter that almost kills them.

John Krasinski, who was writer/director and a major actor in the first Quiet Place, and as writer/director here, is a master of timing and sequencing to get the most out of suspense and horror.  However, he like so many other directors and editors now, love frequent cuts back and forth between scenes.  It makes me dizzy, and I resent having to try to figure out over and over again where I am in following the story.  I see absolutely no benefit to this practice.

The ensemble cast in A Quiet Place Part II is superb, starting with Emily Blunt, who has earned her place as a top-notch star numerous times (The Adjustment Bureau, Edge of Tomorrow, The Devil Wears Prada, A Quiet Place).  Millicent Simmonds as her hearing-impaired daughter is a rising star (Wonderstruck, A Quiet Place), as is Noah Jupe (Honey Boy) playing her son.  Cillian Murphy and Djimon Hounsou as experienced actors in numerous films play their roles here perfectly.  It may be a high point in Murphy’s career.

A Quiet Place Part II is successful in producing jumps and gasps during a true horror show.

Posted by donnarcopeland at 3:32 PM