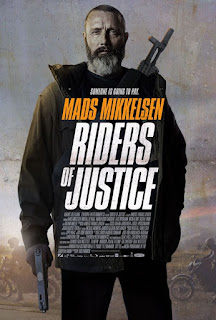 What a mixture of madcap, bloody trauma, and “family” values—all in an unbelievably clever script.  I don’t recall ever seeing a movie quite like this.  It starts out showing a family with the usual kinds of problems and disappointments:  Parent-child conflicts, father who won’t be home for Christmas, a stolen bike, and so on.  Right after this, we see an intellectualizing scientist trying to explain to his board about algorithms.  He’s going home with his box of personal items after he is fired.  You think, “What on earth could this be about?”

But a train wreck will bring all these characters—plus some others—together.  How they get brought together to work on the same problem— that is, whether or not the train wreck was an accident or planned sabotage—is part of the fun of the plot.  This is a real mishmash group of people:  A student (the daughter) and her boyfriend, the scientist with two of his nerdy colleagues, and a soldier in the military (the father).  Not only that, we get to hear snippets of their backgrounds that in some weird way are related to their current behavior.

Director Anders Thomas Jensen and his co-writer Nikolaj Arcel are brilliant in pulling all these elements together in a way that—I can’t say makes sense—but is within the realm of plausibility.  That is their art, and that is what makes us laugh.

There is special reward for Mads Mikkelsen fans in seeing him play an inscrutable character—which is not unusual—but one who must weave together in the same man a cold soldier and someone who doesn’t really understand at all what is going on around him, except when it relates to his military training.  As the father, Markus, of daughter Mathilde (Gadeberg), he is perfect in showing how alienated a person can be from his own offspring, and despite all his resistance, comes to know her as never before.

The two nerdy scientists, Otto (Kaas) and Lennart (Brygmann) add additional color as bumbling fools (despite their high IQ); along with Emmenthaler (Bro), the hacker; and the refugee from the gang, Bodashka (Lindh).  When this motley group forms a family of sorts, you will see how it all makes sense.

Music provided by Jeppe Kaas should be praised for its innovative, integral role in illustrating a story well told.

Of all the films about bringing justice into a crazy world, this one is the most unusual—and entertaining.