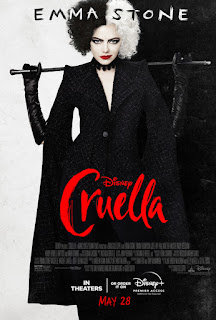 It’s hard to see this as anything but horrible.  We have the tired old theme of two women fighting with one another using underhanded means.  OK, but not only that, the whole exercise is set up to make room for the next installment, which is, probably, further manifestations of the same cat fight.

Little semblance of creativity in the script can be found in this production; the underlying theme is that women are devious and cold-hearted.  Traits in the first evil woman, the baroness (Thompson), are sure to be found in her abused (aren’t all her attendants abused?) assistant, Estella (Stone).

I realize there have been reincarnations of the Cruella character for years, from the time she first appeared in Dodie Smith’s novel in 1956 (The One Hundred and One Dalmations) through numerous appearances in Disney productions ever since, the latest one in 2000 (102 Dalmations), when Cruella was portrayed by Glenn Close.  I’m puzzled about the public’s fascination with these movies—which are always popular—until I realize that they are tapping into a fundamental belief in the concept of women.

Setting that aside, I have to say that the director Craig Gillespie’s previous films (I, Tonya, Lars and the Real Girl) are ones I’ve loved for their demonstration of psychological acuity and empathy.  Maybe there is something I’m missing, but I don’t see any of that here.

All of that said, Emma Thompson and Emma Stone give outstanding performances that display bravado and formidable talent.  Mark Strong, Joel Fry, and Paul Walter Hauser add many of the soulful and comedic twists that move the story along.  The costumes (Jenny Beavan) are extraordinary and form the essence of what part of the story is about and whatever creativity is found in the film.  The music of Nicholas Britell is so much a part of the story, it is essential to its production.

A movie that is bound to please, but begs the question about how women function in society today.