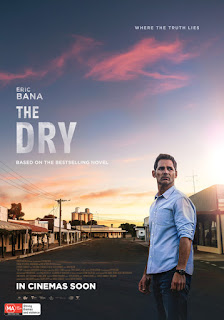 This is a captivating murder mystery that takes place in a small town in Australia, and when childhood friend of the accused killer of his family and himself, Luke, Aaron (Bana) is asked by Luke’s father to attend the funeral, he goes.  Aaron is currently a police detective in another city; he and his father had left the small town years before when Aaron was wrongly accused of killing Ellie, a friend in a small group that included Aaron, Luke, Gretchen (O’Reilly) and Ellie.

The accused Luke eventually married a woman named Ellen, and they had two children, Billy and Charlotte.  Whoever has murdered this family spared Charlotte, an infant.  Aaron is planning to stay only one day in the small town, but Luke’s parents ask him to do some probing into the crime; they can’t believe their son was capable of such a horrific deed.  So in the interest of possibly exonerating an old friend who helped him out long ago, Aaron stays in town, teaming up with local detective Greg (O’Donnell)

We follow along with them, pursuing clues and following up on leads meant to carry the viewer along on a trail with many side trips.  As we go along, we get to know the small-town characters very well, along with the stories associated with them.

Eric Bana is a perfect lead character, with his somber, unreadable expression except when he wants to show a slight emotional pull.  When we see his character as a young high school student with his father and then in his current persona, we get a very good picture of a thoughtful, tenacious, brave man clearly in touch with his emotions.

Directed by Australian Robert Connolly, The Dry is excellent in characterizing small towns whether in Australia or the U.S.—where most people in town know one another, many lives are intertwined in personal relationships, and residents are hesitant to talk about certain town secrets.  Suspense in the film is ever present and ongoing, a strong point for the film and the novel on which it was based:  Jane Harper’s highly rated, well-received debut in 2017.  The final denouement is a little bland, but the rationale underlying the family murder rings true, and we do get to hear the truth about it as well as the earlier death of the friend Ellie long ago.

Cinematography by Stefan Duscio captures so well the drought-ridden countryside with the dusty roads and dried up forests, lending a powerful integration and symbolism within the story.

An engaging murder mystery with a well written script and skillful actors.

Posted by donnarcopeland at 2:10 PM