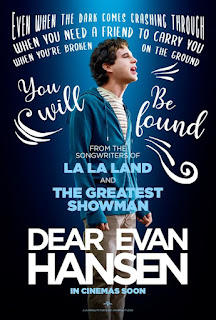 The first song, “On the outside always looking in”, captures the nerdiness of its main character Evan, appealingly rendered by Ben Platt.  Your heart aches for him when he wants to express himself, but the words just won’t come out.  He seems to be without a friend in the world, except maybe one who denies it, saying he and Evan are only “family friends.”  Evan is attracted to a girl named Zoe (Dever), who is hopelessly beyond him and he is briefly bullied by her brother who absconds with a print-out of Evan’s and never gives it back.

The page is found still in his pocket by his parents after his suicide, which sets up a whole chain of events in which people “see what they want to see.”  In his desperation, Evan—with the best of intentions (another theme of the film)—tries to explain the note to the parents, but not wanting to distress them further, goes along with their assumption that the note was written by Connor, their son, whom they would like to believe that Evan was their son’s only friend.

“Oh, what a tangled web we weave when first we practice to deceive”, said Shakespeare.  The film brilliantly demonstrates this human effort, even given Evan’s best of intentions.

It’s something of a surprise (and a creative insertion of the filmmakers) when Evan bursts into song whenever he is in straits to explain himself.  In song, the words come, and he is able to convey his thoughts eloquently.  There is one hitch—his efforts to please the listener and tell them what they want to hear—is going to get him into a heap of trouble.  Trouble that, in the end, makes the whole comedy a life learning experience for him.

There are many clever layers in this story, one being that when Evan tells Zoe in song what her brother Connor said about her, he is actually describing all his own memories and impressions of her.  Another is the (slightly creepy) process where Connor’s family becomes so attached to Evan he becomes a surrogate son, a replacement for the one they lost.

Where all the characters except Evan’s mother (Moore) (whom the filmmakers wisely always keep grounded) get caught up in the delusion, the filmmakers (writer Steven Levenson and director Stephen Chbosky) keep their sensibilities as an anchor, the most important being the underlying messages of substance they wish to convey.

The actors are exceedingly well cast (except for my usual complaint of having older actors play high school students), and along with Platt, Julienne Moore, Kaitlyn Dever, Amy Adams, Nik Dodani, and Danny Pino are excellent.

Dear Evan Hansen should appeal to a broad audience:  the younger set who may be experiencing loneliness and not feeling a part of the group, parents of teenagers, and those of us who have observed family dynamics similar to those shown in the film.

One implication in the film troubled me, which was that it’s “normal” for teenagers to be taking psychotropic medication.  One character was reassuring another about how “everybody” is taking it but hiding the fact.  I looked online and found one study showing that 23.3% of undergraduate students are taking prescribed psychiatric medication (https://www.browndailyherald.com/2018/04/26/23-percent-students-prescribed-mental-health-medication/).  The statistic for high school students is likely to be smaller; nevertheless, I wonder if we are becoming a society where individuals think they cannot manage life without chemical help.

To all the lonely people in the world, Hear! Hear!  This is a film that brilliantly shows us that there may be a lot of strength and character underneath the “withdrawn” or nerdy person.

Posted by donnarcopeland at 7:09 AM