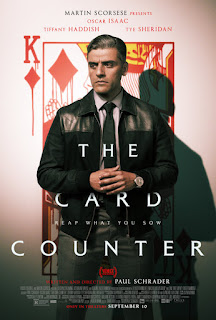 I have heard that counting and keeping track of cards in games can help you win; and William Tell (Isaac) demonstrates this both in a simple card trick and in a fascinating story with themes of punishment and expiation—and their limits.  Writer/director Paul Schrader is a master of nuance and suspense, with engaging characters, richly metaphorical settings (Ashley Fenton), music complementary to the script (Robert Levon Been, Giancarlo Vulcano), and provocative cinematography (Alexander Dynan).

Tell is a card shark who likes to keep a low profile after stints in the military and prison.  He has developed a systematic lifestyle that reflects his approach to cards—astute observation, discipline, the compulsive need to hide, and a solitary existence.  He meets a woman who calls herself La Linda (Hadish) and once she learns how good he is, wants to “back” him (finding wealthy clients interested in betting on him).  She appears to be the sole lightness in his life, but he still holds her at bay.

After one of his games, he is passed a note from a bystander wanting him to give him a call, which he does.  This is Cirk (Sheridan), the son of an old acquaintance in the military.  Cirk has a proposal that seems not to interest Tell as much as the young man’s life story, which relates to the theme of punishment/expiation.  Tell has some ideas about how he can expiate himself of some of his past for which he was punished, but for which he has not forgiven himself.

As with his previous film, First Reformed, in which a pastor is trying to work through PTSD after a war experience, Schrader poses circumstances that force the viewer to contemplate psychological stressors, current issues like war, and—above all—personal responsibility for actions in the past.  That is, it’s about war and about its after-effects and how those involved deal with them.  First Reformed deals with one person’s struggle; The Card Counter deals with the second generation’s struggle as well.

The lead actors are supremely fitted to their roles.  Isaac’s ability to convince us of the depth of Tell’s story is key to the well written plot.  Tiffany Hadish provides (needed) respite from the gruesome details of Tell’s and Cirk’s accounts.  And she once again proves her acting abilities.  Tye Sheridan pulls off the hard-to-engage teenager with a singular passion and not much ambition.  Tiffany Hadish has evolved from her comedy roots in Like a Boss and Girls Trip to being a serious pivotal character in this film.  Willem Dafoe expertly shows us a jaded, exploitative figure who has no qualms about exploiting others under his control in the most weaseled of ways, even to the end.

The psychological authenticity of Paul Schrader’s films always amazes me.  He is clearly attuned to personal transformations with myriad motivations that are not always clear, even to the person, much less those observing him/her.  The arc of transformation is similar in this film to that in First Reformed.   It involves something like “original” to something that is an outgrowth of itself after encountering real-life experiences.

There are small wry touches of inspiration and humor that might go unnoticed, such as William (Bill) saying to Cirk, “You live like this?” (a messy room) and Cirk saying to Bill, “You live like this?” (a compulsively neat room).  Or La Linda taking Bill out  to a “city on fire”, which means walking through a labyrinth of bright lights, possibly as a metaphor for the potential of card winnings—dreams—and then, reality.

An intricately “wired” account of the psychological transformation of individuals as a consequence of their experiences.