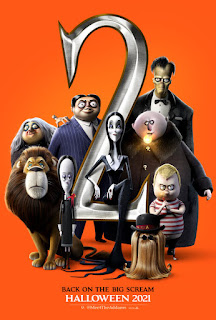 Silly; as it’s meant to be.  This version’s entertainment focuses on Dr. Strange (Hader) who is claiming that there was a mix-up at Wednesday’s (Moretz) birth and that she is actually his daughter.  “Isn’t it obvious?”, he says; she clearly has inherited his scientific talents.  This seems to play into Wednesday’s recent plans where—she being a teenager—is feeling ashamed of her parents and disgusted with her brother and wanting to get away.  The Addams parents try to hide the identity of Strange’s lawyer from Wednesday after the lawyer pays them a visit, but of course it’s only a matter of time before she figures out who he is.

Sensing his beloved daughter’s distancing, Gomez (Isaac) decides it’s time for a family vacation, a trip across the United States.  His wife Morticia (Theron) agrees, saying, “Of course; we have some of the best dark secrets, as countries go.”  As part of the family, brother Pugsley (Walton), Uncle Fester (Kroll), and Lurch (Carel Struycken) will all board a contraption to be driven by Fester, discovering the wonders of America, all while being tailed by the lawyer and his thug.

A trip to Salem gets cancelled because Fester sees a sign to Niagara Falls and immediately veers in that direction.  From there, they will make their way to The Alamo in San Antonio, the Grand Canyon, and finally to Death Valley, which was to be their final destination, except…they must do a detour to Sausalito and the home of Dr. Strange, because Gomez and Morticia are not about to cede their daughter to Strange.

The story and animations in the 2-version are entertaining, although I imagine that those who have seen previous versions of the Addams Family may find it repetitious.  My favorite character is Wednesday who shows a delightful mixture of insight and acerbity and is almost unerringly logical.  When she wins a science contest along with all the other participants, she declares with a harumph, “How can I be a winner when there are no losers?”  After she gives her father the one hug he has been longing for and is ready for another, she refuses, saying, “I’ve been socially distancing since birth.”  These are subtle comments about our current time that I found amusing.

I find the cruelty of Wednesday toward her brother hard to take, although I realize that’s the kind of “pratfall humor” many enjoy.  I find the rationalizing of the parents endearing and refreshing, as they use every means they have at their disposal to bring her back to their fold.  I like the movie’s message of tolerance—even admiration—for strangeness; that’s probably a hallmark of the Addams stories.

Although Addams Family 2 is not something of a new sensation or profound in its insights, I can easily see how many people will find it enjoyable, endearing, and funny.

Posted by donnarcopeland at 12:33 PM