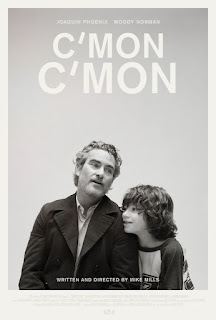 I can see why so many people are taken with C’mon C’mon, a tender story about a man who has never been around children is suddenly charged with taking care of his nine year-old nephew while the parents deal with the father’s mental illness.  What was supposed to be a few days turns into weeks, so the two males get to know each other quite well.

Johnny (Phoenix) has an interesting job as a radio journalist in New York interviewing children of all types/races/nationalities about what they think about the future.  He tries this out on his nephew Jesse (Young-White), who will have none of it, even though he is a bright imaginative kid whose mother has fostered his creativity and inquiring mind.  Jesse is not keen on necessarily doing what is expected, but he is into technology and the media, so Johnny wisely engages him in recording all kinds of urban and beach sounds on the huge microphone he uses for his interviews.

As time goes by, Johnny’s patience is tested by the child—who might suddenly disappear from sight—and has definite opinions about what he will and won’t do.  Still, the kid is interesting, and comes up with questions about Johnny’s personal life that take him off guard and force him to express himself in ways he has never done before.  Periodically, he speaks on the phone with Jesse’s mother Viv (Hoffmann) and is able to get advice from her as well as great understanding of the trials and frustrations of taking care of children.

Joaquin Phoenix is gifted in portraying all kinds of roles, and he fits perfectly into this one, showing his playful side, psychological vulnerabilities, and anxiety when he feels at sea.  It’s realistic the way he might show a sudden urge to quash the child while still clearly being charmed by him.  He and Young-White appear to have a real affinity for one another, just as Phoenix and Hoffmann do.  It’s easy to imagine them all in the same family.  And the arc of Johnny’s and Jesse’s loving relationship is one of the best features; it shows an initial interest that gradually blossoms into a connection between them that will be valuable for both.

Some of my reaction to this film of writer-director Mike Mills comes from my years of experience of talking with children and parents during my professional career as a psychologist in a pediatrics department.  I loved that job, but I think because of it I do not have the same fascination with the material as would those who are less familiar with children’s minds.  I certainly do still find children enormously fascinating, but what frustrated me about the stories here is that they are all like snippets that pique my interest without much follow-up or antecedent information.  It’s a bit like having a meal of appetizers; which can be enjoyable, but is not likely to be memorable or inspiring.  Because of this, C’mon C’mon borders on the prosaic.

C’mon C’mon presents slices of daily life in the dynamic relationship between an emotionally detached man and his clever nephew.