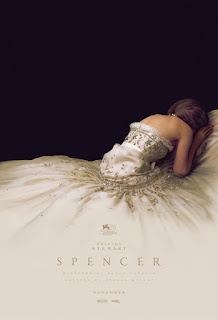 The film begins by noting that it is “a fable”, and that does describe it as what I take to be a diatribe against the tradition of royalty.  It is not a bio-pic about Diana;  many/most scenes are made up by writer Steven Knight and presumably Director Larrain.  Not only does Spencer portray Diana as a spoiled, pouty diva-like person, it doesn’t show royal family members in a much better light.  (They’re shown as unempathetic.)  Diana’s costumes are beautiful (one of her marks in real life), but go over the top, seemingly to show the ridiculousness of royal dress in general.  The same goes for highlighting the elegant dining—I think it’s meant to be a criticism of a lavish lifestyle.

Setting the film in the Christmas weekend Diana is deciding to part with Prince Charles is known as a stressful time, and one can imagine a very difficult one for Diana.  It’s hard for me to believe, though, that Diana’s behavior was so off-kilter that she was hallucinating.  It’s plausible that she was suspicious of the family’s motives toward her, but I find it hard to believe that she was as paranoid as shown.  One chilly scene that is supposed to capture the mood of the family and that weekend is Christmas dinner with almost no conversation and family members eyeing one another.  I find that hard to believe as well.

Spencer implies that Diana was obsessed with her childhood home which, incidentally, is where she was born, but she only lived there a short time.  Much is made of her attachment to a scarecrow on the property and her taking its jacket and instructing her maid to clean it.  In the end, the scarecrow is dressed in a brilliant yellow outfit that Diana is shown to have worn at one time, a caricature of a royal family’s indulgences, I assume.

The only part of Spencer I really enjoyed is the acting, particularly that of Kristen Stewart and Sally Hawkins, Diana’s waiting maid and confidante.  Stewart, who apparently has a positive attitude toward Diana researched the woman’s life and stated that her intention was to portray her as realistically and sympathetically as she could.  She achieves that, and the viewer can easily see her as Diana.  I haven’t been able to discern exactly what she thought of the script, but I wonder what she really thought about it, given its portrayal of a narcissistic, oppositional wounded woman.  Hawkins comes across as a servant devoted to her charge, always with kind and sensible responses to Diana’s upsets.  And their conversations are the only ones that seem to have a ring of truth to them.

I adored Pablo Larrain’s portrait of Jackie (Kennedy), but this portrait of Diana simply doesn’t ring true—not that I knew her personally, as I’m going by my reading of news reports.  It must be that Larrain’s liberal political beliefs as in No, along with perhaps those of his writer Steven Wright (Dirty Pretty Things, Eastern Promises) brought out sentiments against a privileged class, which I appreciate, and can say spoke truth to me.  But I’m at a loss to understand the presentation of Diana Spencer as such a losing kind of woman.

In sum, it seems unfair to concoct such a picture as this one of one weekend in a well-known, complex, multi-layered person’s life.

A princess new to royalty and deceived by her prince is portrayed as an oppositional, resentful woman, despite her being generally known as a real, caring person.

Posted by donnarcopeland at 8:24 AM