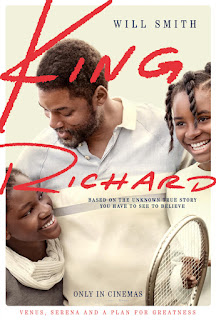 This is a fascinating account about how to make a champion.  Richard Williams, the father of the famous tennis stars Venus and Serena Williams, knew the value of positive reinforcement, despite his tendency to be overbearing, and temperamental.  And let’s not forget the decisive role of his wife Brandi.  She knew him like a book and could read him in such a way she helped him understand himself when he otherwise couldn’t.  And she was a real force in their girls’ training.

The gist of the story is known by most people, that the black family from Compton, California, took the tennis world by storm in the early 2,000’s when Venus began winning tournaments at an early age.  The proud father always responded to reporters and coaches when they praised him for one daughter by reminding them he had two girls who would be stars.

As oppositional and pompous as he often was, Richard had rules he lived by and taught his children, such as “Fail to plan, plan to fail.”  Humility is another principal he at least wanted his children to retain, always remembering where they came from no matter how many prizes they won.  No matter the win, he forbade them to “brag.”  Clear from the film is that much of the success of the girls depended on his salesmanship.  He seemed not to be intimated by anyone; he successfully convinced almost (not all) all of them to at least look at his daughters’ prowess on the court.

I am not a tennis player or big fan, but the film comes across as an authentic representation of what it takes to become a tennis star, the role a parent so inclined could play in a child’s success, and in this case the tremendous support provided by a family that not only stood together but talked through and hashed out problems that arose.   I appreciated the background information about the father that led to the fierceness and perseverance he shows in situations where he is challenged.  Valuable as well is the occasional focus on the marriage and the way the couple solves their issues.

Will Smith seems tailor made for the role of Richard Williams.  He embodies it so well one can imagine that aspects of Williams’ personality are ones Smith knows very well.  As Mrs. Williams, Aunjanue Ellis is an inspiration for all women who need to stand up for themselves.  Ellis shows the full dimensionality of a bright, creative, and loving woman who knows how to be a partner to a strong man, and I hope both actors will be recognized come awards season.

The movie is entitled “King Richard” apparently because of the way Williams conducted himself in coaching and advocating for his daughters.  It seems an apt title to me.  The film does not go into the marriages and divorces of the parents or other types of conflicts in the women’s careers—which is a bit of sugar-coating perhaps—but wisely concentrates primarily on the family during the time Venus is just getting established as a pro tennis player.

This account of the background of two record-breaking female tennis players will keep you entertained and cognizant of the importance of family support.