THE ELECTRICAL LIFE OF LOUIS WAIN 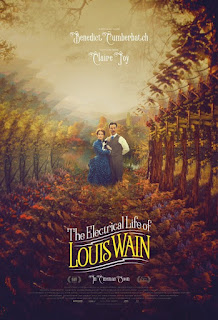 Based on a true story of an exceedingly eccentric man, The Electrical Life of Louis Wain is about a British man living in the late nineteenth century who made a remarkable living out of his cat pictures.  The electrical part is what he feels when he is around cats—inspiration, perhaps?—which he conceptualizes as electricity.  He does talk in the beginning about patents for electrical inventions, but when he strokes a cat and talks about electricity, he senses something of importance, which he attributes to “electricity.”  Who could have predicted that his drawings would promote the habit of having cats as pets—something not done in the 1800’s in Britain.

For most of his life, Louis lives with his overbearing sister Caroline (Riseborough), four other sisters, and his mother.  He seems to have his head in the clouds most of the time—even though he becomes the family breadwinner at age 20—but is stabilized by meeting and eventually marrying his sisters’ governess Emily (Foy).  Their eccentricities fit together well, and she has an uncommon understanding of him; however, their happiness will be short-lived, but his story goes on.  He earns enough money from his drawings, and his art becoming so popular, he is able to support his family—until he discovers a significant mistake and his own mental health deteriorates.

Benedict Cumberbatch and Claire form an appealing and most interesting pair in telling this story.  There is clearly chemistry coming through that I presume reflects the real couple’s attraction.  Cumberbatch is excellent in portraying a befuddled character, and Foy easily slips into a supportive, bolstering role, which is just what Wain needs to ground himself.  As Wain’s sister, Riseborough’s constant yelling in reaction to threats to her control are grating, but most likely realistic.  Much more endearing is Tory Jones’ Sir William, consistently recognizing Wain’s talent and providing him with the kind of support that not only boosted his ego, but helped him (saved him at one point) financially.

The subject is one of fascination for me, so I thoroughly enjoyed learning about Louis Wain’s life, sad as it was.  The movie is illustrated by sepia-toned cinematography that one would see at the time (Cinematographer Erik Wilson and production designer Suzie Davies in their element), which reflects old photographs and art from that period.  It’s a film for those who lean toward the quirky and artistic, who can appreciate its refreshing creativity and appreciating the foresight in director Will Sharpe’s and his co-writer Simon Stephenson’s recounting of the story of a beautiful soul, showing how genius may be compromised by the practicalities and demands of life.

None of the reviews of the film seems to appreciate the lovely conversations between Emily and Louis in their efforts to talk about and consider his life after her death.  Those scenes are ones that—while disturbing at an unconscious level for some—provide something extraordinary in the beauty of this film—and could serve as a model for those anticipating an untimely death.

An account of the life of a beautiful soul, appreciated by some, reviled by others, but one with a clever eye for making drawings of cats that expressed volumes.