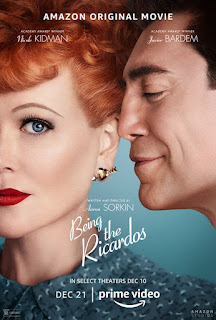 I was not a big fan of the Lucy/Desi shows, so I didn’t see Being the Ricardos with much nostalgia.  But for those who did love them, the film is likely to be a big hit.  A few viewers in the screening audience laughed out loud on cue with the radio audience, suggesting they were having fond looks down memory lane.

I will say that the film is informative in that I was not aware of the significant roles Lucille Ball and Desi Arnaz had had in their productions, from the script to the sets to the executive decisions.  I had read about Arnaz’ revolutionary role in the creation of television as it’s seen today, but the film shows the painstaking efforts of the couple—each with different ideas—in executive decisions.  The stunned looks on the named executives’ faces foretell the significance and revolutionary nature of Desi’s and Lucy’s contributions.

It’s also educational for the viewer to be given a peek behind the scenes and witness the haggling and sometimes brutal struggles that take place among writers, producers, actors, and sponsors in putting on a show.  When we see the finished product, usually little of the blood, sweat, and tears that went into the project are apparent.

Something is puzzling to me, though.  It’s not uncommon for actors to disappear into their characters so much so that the viewer becomes unaware of the actor.  Recent case in point is Jared Leto as a Gucci son in House of Gucci and Benedict Cumberbatch as an American rancher in The Power of the Dog.   And there are countless examples of such through time, with Meryl Streep being one of the paragons of this kind of shape shifting.  However, I did not see that convincing transformation in Nicole Kidman as Lucy and Javier Bardem as Desi.  I was always aware of the actors and had difficulty putting the characters in their place.  The reason this is puzzling is that both Kidman and Bardem are top-notch actors.  It wasn’t as if they weren’t portraying their characters accurately, it was that that “something” that makes the actor disappear was not evident.

One explanation could lie at the writer/director Aaron Sorkin’s feet.  This is his “creation” in a sense, so perhaps he was not as attuned to subtleties and nuances that he could have exploited.  His scripts can sometimes border on the glib, where the writing is more about the craft than about human drama, especially when it is delivered rapid-fire like stand-up comedy.  Other times, I wondered why some dialog was even inserted, such as when writer Frawley (Simmons) asks Desi whether he was scared when the Cuban militia came for his family, which constitutes a “Duh!” moment.

Another somewhat minor—although annoying--issue with the film is sound production.  So often, music and sound effects drown out the dialog, even when sound effects are not necessarily needed (for example, the rain at one point).  Javier Bardem’s English is excellent, and I have never had difficulty understanding him in a movie, but apparently here, he was advised to affect a stronger Spanish accent than even Desi actually had, resulting in my not comprehending all of what he said.  (I never had trouble understanding Desi in sound clips.)

Being the Ricardos will be primarily for die-hard fans who are nostalgic and for those who like to watch behind-the-scenes filmmakers hash out the fine points of scenes, plots, and characters.

Being the Ricardos is for the fans of Lucy and Desi primarily and for a look at the influence two actors had on television production.