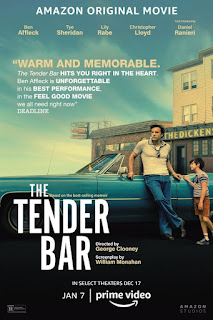 The bar featured in the story is called Dickens; presumably, the one in this film called The Tender Barrefers to the tender care a fatherless boy had as he hung out there with his Uncle Charlie (Affleck), the bartender and his pals, an assortment of father figures who turned out to be immensely helpful to him.  The film is based on a memoir by J. R. Moehringer about his own growing up years.

J.R. (Ranieri as the younger, Sheridan as the older) is an appealing kid, open and eager to learn everything he can about life from the real world as well as from books.  His father only appears occasionally as an obnoxious man, but his mother has high aspirations for him, planning on his eventually attending Harvard or Yale.  Her father (Lloyd) is irascible in his old age but has an intellectual background and his Uncle Charlie (Affleck) is clearly very bright, even though he works as a bartender.  Both men are an interesting mix of reverence and irreverence toward humanity, education, and achievement.

J.R. soaks all this up, receiving constant axioms from Uncle Charlie on how to be a man.  But he always treats J.R. with respect and generosity.  You get the impression he is as glad to have a son-figure as to be a father-figure to J.R.  He and his bar buddies couldn’t be more pleased when J.R. is indeed accepted to be a student at Yale University.

A love interest for J.R. is someone he falls deeply for at Yale, Sidney (Middleton), an attractive, rather mysterious, and evanescent young woman, who seems to regard him with some degree of bemusement, but their relationship lasts during the college years.

After graduation, J.R. comes to a crossroads in his life when he has to commit to his lifelong dream of being a writer.  It’s at this time he realizes it’s a calling.

The Tender Bar is a low-key account of a middle-class child coming of age at a time when any number of paths are open to him.  It’s interesting to see the influences around him, the formative events in his life, and how personal relationships have shaped him.

Ben Affleck seems to me to be the main star here, with his quirky, friendly style that captures the bartender role.  Although Tye Sheridan, as good an actor as he is, is miscast for this particular role.  Ranieri as the engaging younger character seems to fit perfectly.  George Clooney’s directing history is far less illustrious than his acting career.  He had a good run with Good Night, and Good Luck (2005), but his attempts since then, except for The Ides of March have not been stellar.

Part of the misjudgment here may lie in the script and/or the choice of story.  It wouldn’t have to be high drama, but I found myself wanting more than the prosaic.  No character is especially complex, and most of the story is expected.  Even the title could have been improved by calling it The Dickens.

Despite The Tender Bar’s fine cast, this story ends up being rather prosaic.

Posted by donnarcopeland at 4:48 PM