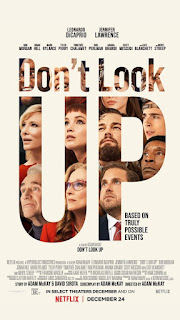 In the beginning when astronomer Dr. Randall Mindy (DiCaprio) and his graduate student Kate (Lawrence) first discover a “planet destroying comet” headed for Earth they attempt to inform the proper authorities and American people that the country has only six months to get ready for it.  They’re wanting everyone to look up and see the moving light with a tail and understand it is coming our way.  The movie gets its title from those not wanting to accept that a comet is on its way and very dangerous; when it appears to the naked eye in the sky some advise others, “Don’t look up.”

Well, the movie is a very funny parody about our political times, shining its light on climate change deniers, right-wingers, Fox News, the media’s exploitation of trivialities and current pop interests over serious news, and prominent Republicans who have their own ethics and their own interests at heart.  Topping the list is the President (Streep) with long blonde hair and a primary interest in getting re-elected [her empty-headed son Jason (Hill) serves as her Chief of Staff].  As expected, the President and her “scientific” appointees want to keep the news quiet and just “sit on it” for a while (i.e., until after the mid-terms).  DiCaprio has observed that “Adam [McKay] has woven an incredibly timely message about society, how we communicate, our current priorities, and the climate crisis into an absurdly funny yet important movie."  https://www.elle.com/culture/movies-tv/a37512771/dont-look-up-news-cast-spoilers-date/

Upon hearing the news, the administration’s reaction and its influence spreads and influences those who similarly want to ignore science and scientists, ridicule them, and even become very nasty toward them on social media. The two scientists’ media advisors tell them to “keep it simple—no math”, to which Dr. Mindy replies, “But it is math!” Clearly, because he is a male and speaks a language many can’t/won’t understand, Dr. Mindy is made a darling; whereas Kate—younger, more articulate in plain language and more in touch with her emotions—becomes a pariah.  And gets arrested by the FBI more than once.

Even the sexual boundary issues are brought into play, with a sensuous “Daily Rip” TV show host, Brie (Blanchett) seducing Randall and promoting him so long as he does her bidding.  (Her show with co-host, Jack Bremmer (Perry) is clearly a reference to “Fox and Friends” on Fox News.)   In Kate’s circle, the men are aware of the Me Too movement, such as one asking politely if he may touch Kate’s hair in a “nonsexual manner.”  These are anti-war anti-violence protesters who are gentle and respectful of women.  (The currently adored Chalamet plays one of them.)

The cast is huge and full of some of our best actors who are at the top of their game.  DiCaprio is almost unrecognizable in his slightly befuddled scientist mode.  It’s good to see Jennifer Lawrence back in action after a brief hiatus, and she plays the fiery young scientist most convincingly.  It’s too bad the writers had both scientists becoming uncharacteristically (for scientists) hysterical and verbally combative at times.  It undermined their believability in a significant way.

A scene-stealer is Mark Rylance in his most surprising role:  that of an owner of a tech (phone) company who sees himself as a scientist because his company uses algorithms.  He comes across as an odd kind of person, but is a large donor to President Orlean’s campaign, so has her ear.  He convinces her of his alternative plan to deal with the comet, and we see how that works out.

Entertaining is Ariana Grande’s performance as a pop star whose love life steals away the public’s attention from the impending danger to the outcome of her current romance.  It’s still another comment about the current attention span and the public’s and media’s focus on their idols.  Other actors who should be acknowledged are Rob Morgan as a Black scientist and Ron Perlman as the Administration’s willing sacrificial lamb (who didn’t have to serve when the mission he was on was aborted) but who nevertheless saw himself as a fighter and a hero.

Adam McKay has had a significant role in movie productions including The Big Short and Vice, and the current TV series “Succession”, but Don’t Look Up seems to be a major shift into satirical parody.  He clearly has his finger on the times, and doesn’t mind at all skewering others when apt.  This is a “feel good” movie for those of us more politically liberal and concerned about the future of our democracy.  It describes so well the world we live in with all its puzzlements and outrageous people and behaviors.

Don’t Look Up refers to the time when the deniers are the most desperate in wanting people to deny reality.

Don’t Look Up:  A must-see for everyone now living in a most perplexing age as far as people are concerned, but where science is concerned everything is quite clear.