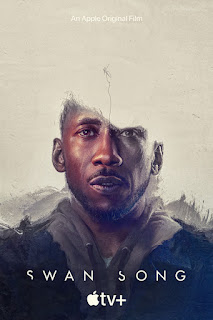 This bit of sci-fi poses some interesting moral and ethical questions about the extent to which one could/should make a valiant attempt to spare his family grief and suffering.  Cameron’s (Ali) wife Poppy (Harris)—normally a vivacious, perky kind of woman—had undergone a severe reaction when her twin brother was killed, and if he could protect her from the potential for that to happen a second time, he is seriously considering participating in a medical experiment as a solution.

Cameron, a commercial artist given to presenting his spontaneous drawings of those he meets to them, has been experiencing the effects of a brain disorder for some time, but hasn’t had the courage to tell Poppy.  They have a young son and another child on the way, comprising a most happy family.  When his disease worsens, Cameron is presented with a most unusual option.

Arralabs is experimenting in making molecular copies of terminally ill patients—not just their bodies and physical appearance but all their memories from the time they were born, as well as their unconscious mind—as a way of preserving family relationships and avoiding grief after a major loss.  It boggles the mind to think about, and as you see how the process works there is definitely an eeriness about it.  You see the clone being developed in the lab, and indeed he looks exactly like Cameron.

The process goes on for a number of weeks for a full transition to be completed, so Cameron has some time to prepare—and even back out—although after a certain point dropping out won’t be possible.  The clone’s memories of the transformation will be erased, after which, he will be Cameron.  Cameron must then bear his own fate alone, albeit on Arralabs’ extensive well-kept, scenic grounds in the Pacific northwest.

Dr. Scott (Close, embodying the ideal doctor—warm, direct, sympathetic, informative) has given Cameron a detailed description of what to expect and the terms of the contract.   Whenever he has doubts, she informs him of his options, and although she makes it clear all of this is his own choice, she encourages him to stick with the plan for the sake of his family.

Swan Song, written and directed by Benjamin Cleary, skillfully and realistically portrays the kinds of dilemmas and considerations that one would encounter in considering such a proposal at this.  He depicts research hospitals and staff as caring and informative—just as one would hope to—and does—find in good research centers.  And he shows (thoughtfully enacted by Ali) the degree of ambivalence the research subject will undergo in making such a momentous decision.  The Lab has arranged for Cameron to see his clone interacting with his family at home, so he must deal with all the emotions that brings up for him.

As a futuristic solution to the problem of loss and grief, I appreciate this slant on how things could be at some point in the future.  The world is changing at a rapid pace, so it is within the realm of possibilities that such a system could be an option.  (I’m avoiding, of course, how much it would cost and who would pay for it.)

This adventure into the sci-fi world of human replication offers an intriguing new idea for managing loss and grief.