I WANT YOU BACK 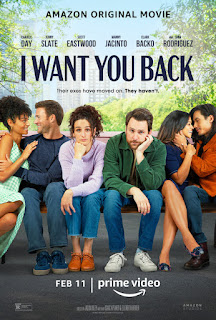 This is a smart comedy—laugh-out-loud funny in places—well written (Isaac Aptaker and Elizabeth Berger) and suspenseful because it’s unclear just how everything will be worked out.  In some ways, it’s a series of funny disasters, but it’s more than that in its touching on the difficulties in long-term relationships and the hazards of scheming to achieve an aim.

Much of the credit for its spontaneity and set-ups goes to an excellent cast of actors experienced in the art of comedy.  Peter (Day) has a serious relationship with Anne (Rodriguez), and Noah (Eastwood) and Emma (Slate) have been together (happily from her point of view) long enough to consider taking the next step.  The two couples’ break-ups take Peter and Emma totally by surprise, and they feel the stings of being dumped.

It turns out, they work in the same multi-story building, and when they meet unexpectedly in a stairway after individual meltdowns in meetings, they commiserate with one another, and decide to get together after work.  While trying to work through their grief by drinking and singing about their troubles at a karaoke bar, they come up with an ill-conceived plan to break up their former mates’ new relationships.

This leads to sometimes hilarious situations in all kinds of settings with additional characters thrown in, the most touching of which is Emma coming across 12 year-old Trevor in her work as a “volunteer” for a middle-school drama, directed by Logan (Jacinto), Anne’s new love.  Trevor is filled with rage about his home situation, and Emma is able to do some amateur (but helpful) counseling to steer him onto a better track.

Other funny scenes come up with paunchy Peter attempting to befriend Noah, a physical trainer.  Noah trains Peter in physical activities he never dreamed of doing, much less mastering.  In the process—exhausting as it is—Peter discovers a new side of himself.

Jason Orly directs I Want You Back admirably.  The timing of the scenes in telling a story and balancing out the comedic and “truthy” elements skillfully sustain interest and engagement of the viewer.

A comedy that will make you laugh out loud while making some insightful statements about people and relationships.

Posted by donnarcopeland at 9:36 PM