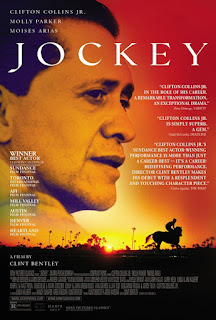 Jockey is less about horse racing—although the sport is seen through windows of the plot—as about human relationships and their uncertainties from different perspectives.  The first window we see about being a jockey is the toll it takes on the body.  Jackson (Collins) and his mates in something of a group therapy session recount all the ways they have been injured and almost killed.  But their love of the sport keeps them engaged in it—sometimes longer than is advised.

Jackson is one of those so identified with being a jockey it’s clear he can’t imagine doing anything else.  He has achieved national fame as a jockey to the extent that everyone seems to know who he is, if not personally, by reputation.  But—like many of his cohorts—he’s had a number of spinal and other injuries, and now is beginning to notice some of the long-term effects.  Proving his mettle, he tries to compensate in every way he can, including denying the seriousness of what he sees and is told by the doctor.

Jackson has a long-term relationship with Ruth (Parker) his trainer through all kinds of high and low points.  They’ve spent a long time together, going over daily chores and decisions so that they’ve come to know each other very well.  She senses something, and asks probing questions, but he is not forthcoming.  Their biggest interest they have now is in a young horse they’ve just acquired which has great promise.  Jackson is convinced Leo is a winner and fantasizes about his participation in that achievement.

A tangent in Jackson’s story comes in the form of a young aspiring jockey new on the scene.  Gabriel (Arias) has gotten wind of him and approaches him in a diner intending to mentor a new recruit.  He gets more information about Gabriel than he expected, which takes him aback and causes him to pull away.  After giving it some thought, though, he softens and begins to develop a kind of ambivalent friendship with Gabriel.

The strength of this movie co-written with Greg Kwedar and directed by Clint Bentley (both to be credited for their previous Transpecos) is its attention to individuals—their quirks, their resemblances to others and humankind in general, and all the different kinds of dramas they will encounter over the course of their lives.  We’re given enough information about Jackson, Ruth, and Gabriel to see them in their uniqueness so that their relationships with one another are entirely sensible, even if not always sympathetic.

My experience of the story is that it is slow in the beginning, to the point that I thought, “This is interesting, but not engrossing”—although I understand this part is all about the set-up. About 2/3 of the way through, however, the plot starts to become gripping and suspenseful as to how it will turn out.  And by the end, it becomes clear how much depth the film has in making statements about its characters and life in general.

Collins and Parker are well known to us as accomplished actors, and although Arias is not as well known, all three are perfectly cast for roles that highlight their skills.  Collins (also featured in Transpecos) for his “true grit”, Parker for her warmth and support in a friendship, and Arias as a “newbie” who needs to explain himself.

Jockey is a film for those who love seeing characters come to life as real people.

Posted by donnarcopeland at 8:40 AM