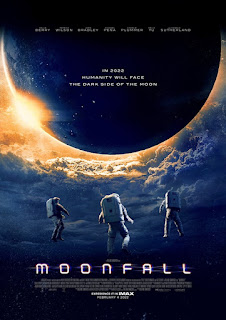 This movie is a disaster—but not in the way the filmmakers intended.  It’s the disaster.  The thinly drawn characters, the inane/stereotypical dialog and awkward dreamed-up situations make it hard to sit through.  Special effects are about the only aspect of Moonfall that have a chance to entertain.

The story starts in such a hodge-podge, it’s difficult to discern the plot and sort out the characters.  People and technical information are thrown out rapid-fire in the first few minutes so that it takes some time to get oriented.  Finally, we begin to see that something major is happening with the moon that if not stopped will endanger the earth.  Institutions such as NASA and the military are portrayed as run by self-serving fools.  For instance, there is the military solution considered of nuking the moon, with no regard to fall-out danger to the earth.

The main characters include Brian Harper (Wilson), a disgraced astronaut who is blamed for his friend-colleague’s death, his ex-wife Jo (Berry) who is now married to a general in the military and who is made the leader of NASA where she is employed by the current chief as he is running out the door, and hapless janitor KC Houseman (Bradley) impersonating a scientist-astronaut and claiming to understand a complexity in the universe that has stumped the real scientists.  In the movie, he is proven to be right.  The upshot is that these three are going to revisit the moon, discover what is wrong and make things all right on earth.

In the process of the tale, discounted characters turn out to be heroes, government departments and authorities are portrayed as incompetent fools, and somehow miraculous things just happen in order to carry the story along or save the characters.  Tender parent-child scenes are thrown in liberally sometimes during the height of emergencies, and conflicts get resolved somehow, even between ex-spouses.

Most of these shortcomings can be attributed to the director Roland Emmereich, whose past films have many of the same elements (e.g., Stargate, The Day after Tomorrow, The Patriot, and Independence Day) discussed above and for which he has been criticized.  What Roger Ebert said about Stargate could be said about Moonfall: “Stargate” is the kind of movie where a soldier can be transported to “the other side of the known universe” in a whirlpool of bizarre special effects, step into a temple on an alien planet, and say, “What a rush!”  https://www.rogerebert.com/reviews/stargate-1994.

Cinematography (Robby Baumgartner) and special/visual effects are about the only aspects of Moonfall worth your time.  Not only are they entertaining, but the viewer can appreciate them as works of art and technology.  The scenes in space are breath-taking and convincingly take you to another world.

The telling of the story is hard to bear, but cinematography and special effects might be worth your time.