THE SKY IS EVERYWHERE 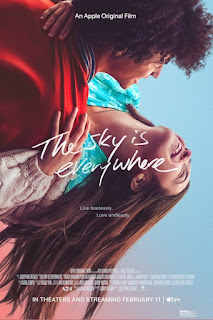 Grief is one of those experiences that may take many twists and turns.  That’s the theme of The Sky is Everywhere.  Lennie (Kayfman) loses an idolized older sister who she assumed would be with her going to Julliard and beyond.  But that’s not what happens; her sister Bailey (Liu) undergoes an arrhythmia that takes her life.  Lennie had already lost her mother (to the same condition) and has been brought up by her grandmother (Jones) and Uncle Big (Segel), two quirky, entertaining characters who go against stereotypes.  Lennie and Bailey were extremely close—almost like twins—and the loss for Lennie is profound.

There are a few hokey scenes, as when Lennie muses about her sister’s death and says that all she can think about is falling into somebody’s arms.  And then what follows are scenes of the teens at high school swooning over a trumpet player’s (Coliman) tunes.  Another is when creeping stems of roses wind around subjects in a seduction.  But in a surprising turn (and redemptive for the movie) is when Lennie discovers the trumpet player, Joe, has been admiring her musical talent, and as soon as he gets a chance begins to woo her.

The complexities of the relationships in this film are testament to its going beyond rom-com to a story that has something important to say.  First of all, is the portrayal of the different kinds of grief expressed by those connected to the lost one—the sister, the lover, the grandmother.  The film does a good job in showing how differently grief is manifest in figures left behind.  It deals with the typical complaint that the “wrong one” was taken, that it should have been “me.”  And it sustains suspense in how Lennie will resolve her dilemma.  The film is also very good in showing how crutches people often use to cope with grief are not necessarily helpful.

This is a film that surprised me in its depth of portraying loss and in its going beyond the usual in showing ways of coping and how it takes family and friends to be of real support in getting through it.  Director Josephine Decker showed her insight into female roles in Shirley (2020) and accomplishes it again here in a professionally aspiring woman’s dilemmas when she is confronted with real-life situations.

An honest, enlightened portrait of grief, showing once again the pull between personal and professional goals.

Posted by donnarcopeland at 10:40 AM