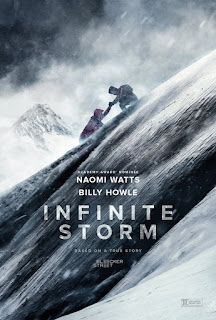 You will get chilled and exhausted as you watch this 127 Hours (Danny Boyle) type of thriller about a rescue in the White Mountains of New Hampshire.  Pam Bales (Watts) heads out for a day of hiking carefree.  Her friend notes that a storm is coming, and shouldn’t she stay home?  No, she treasures her time in the mountain wilderness for the healing she experiences after the heartbreaking losses in her life.  It’s a time when she can feel free.

Pam notices when it starts thundering and snowing, but she keeps going undeterred until she realizes a blizzard is mounting, and she heads back down.  She has to pause from time to time, and experiences real terror when she falls into a deep hole.  Now and then she thinks she hears voices and even blows her whistle but gets no response. Then, she spots sneaker prints in the snow and soon comes upon a figure sitting on the edge of a mountain.  He is mostly unresponsive, so she says she will call him ‘John’ and assures him she is from Search and Rescue.  It’s clear from watching her that she knows what she is doing, and fortunately she had packed extra supplies in her backpack.  How the man is dressed is puzzling; he is wearing sneakers and casual clothes.

Pam is able to rouse him and warm up his body; but there is something besides his clothing that is strange to behold.  He is very uncooperative, and on their descent when times get tough, he tells her, “I can’t do it!”  This is perhaps the most surprising aspect of the movie—someone who does not want to be rescued and consequently puts both him and his rescuer in danger.

At times, the viewer will get disgusted when he behaves so childishly as a grown man.  Come to think of it, most children would put him to shame.  You wonder at her persistence in continually goading him when he clearly wants to sit and die.  He can’t inch his way on a log over a stream without falling in the water below.

Naomi Watts is at her best in going about her business with determination.  (Kudos to her and the filmmakers for realistically showing the aging, stresses and strains in her face when she is normally seen as a beauty.)  We learn at the end of the film what is behind her determination, and where it might not have made sense before, it does now.  Watts is a treasured actor (King Kong, Mulholland Drive, 21 Grams, Birdmen) generally admired for her skills, and she shows “true grit” in this particular role where she must act as a therapist out in the brutal elements.  Billie Howle does a commendable job, albeit in an unadmirable role.

Lorne Balfe’s music provides needed relief during the numerous tense moments of Infinite Storm, and Javier Aguirresarobe’s cinematography captures the brilliant snowy mountain landscape in a way that enhances the emotionality.  Polish female director, Malgorzata Szumowska (Never Gonna Snow Again), has won numerous awards in Europe, but is relatively new to the U.S. scene.  Screenwriter Joshua Rollins based the plot on the real-life experience of Pam Bales, a nurse whose story was recounted in a Reader’s Digestarticle by Ty Gagne.

Dramatization of a heroic rescue in the White Mountains of New Hampshire by a mother/nurse/mountain guide.