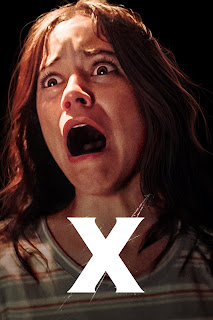 As the plot thickens, it becomes clear that members of the group (except for RJ and Lorraine) have very liberal views about sex, and when Lorraine voices some religious concerns, the group tries to open her up to thinking a different way.  The trouble comes when Lorraine starts softening to the idea, which startles RJ. He’s not ready for that.  His sole aim is to make an indie film; not a porn flick.  What follows is what happens in slasher movies like Chainsaw Massacre when the farmer and his wife’s spying informs the two of them about what the group is up to.

Although as I said, the film is very much like your usual porn fare (set-ups, script), it does have some interesting and thoughtful characteristics.  For instance, it’s good at foreshadowing; a woman staring out or into a window, an evangelist on television preaching about sexual morality, dead bloody cows in the road run over by traffic, and a close-up of a chicken as the group pulls up to the farm/ranch house (this brought up chuckles in the audience), where Wayne hopes to film his movie.  He wants to use a small house on the property as a set as well as a place for the group to stay.

Beyond the foreshadowing, I’m not sure about the editing; in particular, the technique of starting a scene with one set of characters but concluding it with another set of characters. Is this artistry or simply a cheap magician trick?  It bothered me several times while watching this film.

Another interesting observation I had—and I don’t know whether the filmmakers were conscious of it when they included it—was that the horror the audience seemed to experience at seeing an old woman’s desiccated body and her using it for seduction was as great or greater than all the blood and gore in the rest of the story.  I found this very amusing.

Mia Goth is known for her roles in previous horror/sci-fi/adventure films, and she is good here as an ambitious “nobody”, aspiring to stardom.  She and Henderson pair together well as a couple.  As a sexy blonde, Brittany Snow provides much of the light and glamourous sides of the story.  Kid Cudi—a producer as well as an actor—serves as believable stud in the cast.  Jenna Ortega is able to pull off a naïve but smart character who is open to change, and Owen Campbell’s acting skills are shown in his championing indie films and his surprise and huffiness when his girlfriend, in his mind, betrays him.