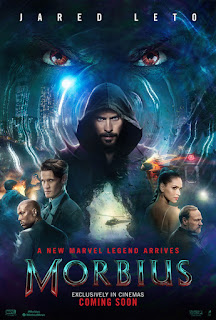 This production is interesting, which is likely an assessment below what the filmmakers were hoping for.  The CGI is good, especially in transforming the faces or Dr. Morbius and Milo, but at times when it becomes just a riot of color on the screen, it’s a bit much and dilutes any meaning filmmakers hope to convey. Jared Leto is at his usual level of excellence, always adapting to whatever character he is playing.  It was fun to see the British actor Sam Smith playing a good/bad guy, dropping his usual polite British demeanor.  Jared Harris is likewise at his usual best as the kind and humble physician.  Adria Arjona’s character as Martine spices up the screen with her good looks and noble character.

The movie begins with Michael Morbius as a young boy meeting Lucien (whom he names ‘Milo’ right away) in the hospital for blood disorders.  They have rare diseases for which there is no known cure, which binds them together as life-long friends.  Michael becomes a Boy Wonder who already is showing a kind of promise that impresses his doctor (Harris), who arranges for him to be in a gifted and talented program in the U.S.  Fulfilling the doctor’s hope, Michael is brilliant and studious, quickly earning his doctorate at age 19.  Currently as a young adult, he is making a name for himself by creating artificial blood that can be used on the battlefield, but his hope is to create a cure for his disease.

With the help of his colleague/fiancé Dr. Martine Bancroft (Arjona), Michael (Leto)  begins conducting research on animals, then moves on to human research.  Of course, he can’t resist trying it on himself, the consequences of which are like the boy in the childhood poem, “when he is good, he is very, very good; when he is bad he is horrid.”  The positive is that his body recovers so well, he becomes superhuman, able to fly and have phenomenal strength.  The bad part is that he requires human blood to sustain his improvement, making him vulnerable to destructiveness.  Since Michael is an ethical, thoughtful man, he must wrestle with himself when he has certain urges.  But things get complicated when Milo (Smith)—who has become his friend and benefactor and who doesn’t have the ethical grounding Michael has—thinks he is entitled to the serum.

Direction by Daniel Espinosa reflects his interest in mixing Marvel type of action with horror.  He successfully does it here, merging a basically honorable personality with one affected by blood thirst, and illustrating the contrast between someone like that and someone who is mostly in for a good time to compensate for the years he has lost because of his illness.  This kind of dilemma and soul-searching is uncommon for Marvel-based films but reminds me of the recent Warner Bros. produced The Batman, in which he questions himself and tries to listen to his conscience.

Marvel fans may regard this production as the “same ol’, same ol’”, but I suggest looking at the deeper issue Espinosa is trying to put forth—that of a superpower in the hands of ethical vs. unethical characters.  I think the writers Matt Sazama and Burk Sharpless achieved that goal, although it may not be obvious to many.

Dr. Morbius finds himself in an ethical dilemma when as a basically honorable man he develops a serum that cures blood diseases but creates superpowers as a side effect.

Posted by donnarcopeland at 9:38 AM