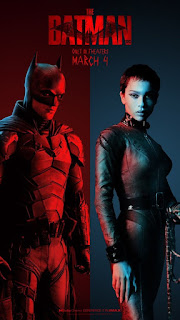 An eerie story with continually changing perspectives within a complex plot.  It’s especially remarkable that the musical theme throughout this action film is “Ave Maria” (part of the humor, I think).  Thankfully, in a three-hour film there is plenty of action to make the time go by quickly, especially since there are many, many characters to sort out and puzzles delivered by the Riddler to decipher.  Another entertaining aspect of the plot are numerous plays on words, such as “thumb drive” and one of the riddles being, “What does a liar do when he’s dead?...He lies still.”

Robert Pattinson as this Batman in his second year of fighting crime convincingly portrays the mysterious, stoic figure he is known to be, even when sorely tried by The Riddler (who is targeting Gotham City residents) and fetchingly tempted by the exotic Selina Kyle (Kravitz), who is almost as fierce a fighter as Batman.  Colin Farrell is unrecognizable as a thug called The Penguin, and these fine actors are joined by Jeffrey Wright (a detective on the police force), Paul Dano (a crazed orphan grown up), Peter Sarsgaard (as a corrupt city official), Andy Serkis (in the purely dramatic role as Alfred Pennyworth), and John Turturro (in his rare portrayal of a bad guy).

Likewise, the crafts are well represented by Greig Fraser’s cinematography, Michael Giancchino’s music, and their colleagues in production design, sound (ah!, the effect of Batman’s ominous footsteps), costume and makeup, and special and visual effects.  Fraser has many scenes so dark it takes some work to figure out what is going on, and with some, being seen only through windows.  But stand-outs are the impressively composed shots that could stand alone as artistic productions.

I can say that the usual car chase that seems to be a must in this genre is present here as well, in just as much ridiculous, impossible feats as in all the others.  Two cars racing down a crowded turnpike while going against traffic and everyone in those two cars surviving goes way beyond the pale for me.

All of these attributes (except for the car chase) are testament to Matt Reeves’ direction and co-authorship with Peter Craig.  (Bob Kane and Bill Finger are the original creators.)  Clearly these filmmakers and their associates collaborated well as a team in creating a work of art that allows us a sense of peeking in on an unfolding drama among real people that is relatable to most of our lives today.  I especially appreciated something not usually seen in this type of film—the realistic portrayal of deep emotions and conflicts (including Batman’s self doubts—which I think make the characters seem like real people to us.  Batman’s history with his family of origin and his having to sort out truth from fiction is an example of this asset.

The Batman is a combination of mystery, logical deduction, family drama, and spectacle that is likely to be entertaining to most people.

Posted by donnarcopeland at 7:40 PM