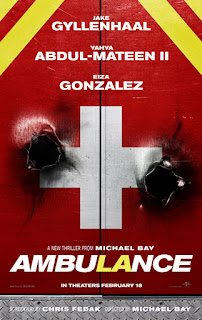 There are thrillers, and there are thrillers.  But when the plot is so outlandish it becomes utterly unbelievable, the thrill goes…goes…it’s gone.  Imagine a case in which a criminal (38 banks robbed in the last 10 years) is so good-hearted he wants to aid his adoptive brother by stealing money from a bank so the man’s wife can get medical treatment.  Right from the beginning, the bank job has problems, after which an ambulance is commandeered with an EMT and a wounded policeman aboard.  All the while the two heist brothers Danny (Gyllenhaal) and Will (Mateen) argue with each other repeatedly.
Sometimes they are arguing with Kim (Gonzalez) the EMT attempting to treat the wounded officer while the ambulance is careening around the city.  The police and an FBI agent are after them with helicopters overhead, and they bicker as well.  There’s so much machismo all around trying to establish who’s the alpha dog, one could almost smell the testosterone.
One of the most bizarre sequences is when Kim decides the wounded officer needs to have surgery, and Danny knowing that it’s crucial for them to keep the man alive, whips through her phone and finds the names of doctors who can guide her through it.  The one he gets hold of has to consult two trauma surgeons on the golf course to assist.  Can you believe she is able to get the bullet out?  Fantastic.
Normally, I’m more lenient with films in which a favorite star like Jake Gyllenhaal is involved; however, this is a time where about all I remember of his character is that he is yelling.  None of the nuanced, uncanny portrayals that are his usual show of talent and skill.  Yahya Abdul-Mateen and Eliza Gonzalez are given a few more chances to show other kinds of emotions, which were a relief, and they both do well.
A few humorous moments are in the film to pull up some laughs in the audience, but basically, this is a two+ hour car chase with constant vociferous challenges.
Producer/Director Michael Bay is known primarily for his six Transformer (2007-2018) movies, none of which were well received, except for Bumblebee in 2018.  I haven’t seen all of them, but of the ones I am familiar with, I was struck by his tendency not to portray strong human emotions in a convincing light.  It’s the same here, where all the characters are pretty much one-dimensional, stereotypic figures.

There is almost nothing to recommend in this overly long movie consisting primarily of an endless ambulance/car/helicopter chase with implausible scenes in the forefront.