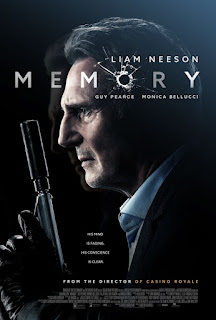 No justice?  Well…maybe…  That’s the subject of this thriller starring Liam Neeson in the role of a paid assassin; that is, is justice ever served, really?

The extra twist in this movie based on an earlier Belgium movie entitled The Memory of a Killer is that the paid assassin is suffering from progressing Alzheimer’s Disease.  In this case, Alex Lewis (Neeson) is in his later years and planning to retire.  No more “jobs.”  But as a favor to an old friend, he agrees to take on one more.  “Famous last words” and all that.

The beginning of the intrigue is a bit confusing at first, with six different people in different places introduced right away.  Keep track because you’ll encounter all of them later.  The upshot is that Alex has been persuaded to take on another job.  We quickly move from Guadalajara to El Paso to Mexico City and back to El Paso.  Essentially, the plot addresses the fundamental issue of whether justice can ever be served.  There are different kinds of justice, of course—what happens to those caught up in something in which they have no control—and true justice in which perpetrators of cruelty are given their comeuppance.  Those who are complicit in injustice are likewise addressed.

Vincent Serra (Pearce) is a committed FBI agent who takes an interest in a child, Beatriz (Mia Sanchez in a top performance), caught up in something she cannot possibly understand.  She’s the daughter of a trafficker snared by Serra and his team.  He recognizes her innocence (an emotion we later learn is possibly based on his own experience) and tries to see that she is protected by U.S. child protective agencies.  Here, the issue of the treatment of undocumented people is touched upon.  (A strength of this film is its ability to layer related social issues.)

The history of the plot itself is based on first a book by Jef Geeraerts, a film, “De zaak Alzheimer” by Carl Joos and Erik Van Looy and a screenplay by Dario Scardapane.  Director Martin Campbell with his collaborators cinematographer David Tattersall, musician Photek, and the actors Liam Neeson, Guy Pearce and the rest of the cast deliver a thoughtful action film that is worthy of the genre.

Memory is a thriller through and through where we see a paid assassin acting on personal limits (which are explained in the end) creating such an uproar he ends up being on the side of the FBI agent he deems to be moral and committed.  I liked that in the end justice can be served.

An unlikely thriller in which moral limits are tested and found to be among those least admired.

Posted by donnarcopeland at 9:56 PM