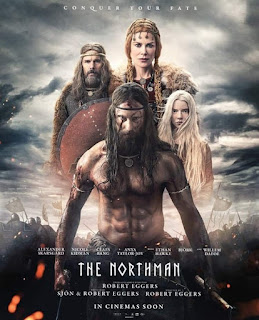 Oh, those Vikings!  They’re a brutal lot, and Director Robert Eggers with his co-writer Sjon (a poet and novelist as well as screenwriter) have presented us with an extraordinary drama that gets into all kinds of substantive issues of the ages—war (of course!); vengeance; family belonging, loyalty, and entanglements (including incestual); romance; and more—all against the backdrop of sweeping countryside vistas, blood, and gore.

We get a brief picture of a happy royal family—King Aurvandil (Hawke), Queen Gudrun (Kidman), and Prince Amleth (Oscar Novak the younger, Skarsgard as the older), maybe with some raising of eyebrows, but with the King making his wife and son mindful of the burden of royalty.  He starts training Amleth bigtime in warrior ways, which includes dog-type faceoffs, and making him promise he will avenge his father’s death if it comes to that.  We’re told that honor is above all the highest virtue.

The tale goes on, pitching the viewer into the 895 A.D. Vikings world through not only the plot, but also expert cinematography (James Blaschke), production design (Craig Lathrop), music (Robin Carolan, Sebastian Gainsborough), and special effects (too many to mention) as well.  The plot transports you along making you feel as if you are there, thanks to that and all the crafts supporting it.

Quotable quotes are sprinkled about liberally, such as, “You have the strength to break men’s bones; I have the cunning to break men’s minds” and “My earth magic will stoke the flames of your sword”, both spoken by the fetching Olga to Amleth.  Still, some metaphorical references are humorous such as the cleverly inserted “kiss my butt” action.

The most gripping part comes when Prince Amleth is confronted with elements of the prophecy told to him as a child that at some point, he will have to make a choice between the protection of loved ones and honoring a promise.

This is not only a visually beautiful film, it taps into fundamental beliefs we all have about family, war, and conscience, elevating it above your regular adventure film by allowing us to experience some of those real dilemmas that many people must face even now as in the past.  Some are publicly heroic, but some are simply the everyday experience of a reality a person did not plan to encounter.

This is an exquisitely conceived film that tells a story for the ages.

If you like adventure with intelligence and cleverness and can stand the gore, go to this movie.  You will be rewarded.

Posted by donnarcopeland at 11:10 PM