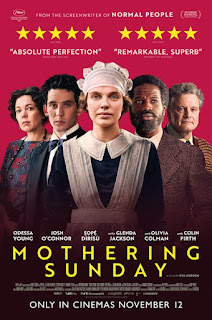 A romantic tryst in a mansion on a sunny day between lovers who have been seeing each other for seven years seems like it will be a lovely story, except that it’s bittersweet; this will be their last time together because Paul (O’Connor) is getting married the next day to someone else.  Jane (Young) seems to be taking it seriously and calmly, and one wonders what is going through her mind.

The movie is set in 1924 in Britain when class boundaries are clearly defined.  Jane is a housemaid for the Nevins, a family close to Paul’s, and it is in his parents’ manor that the two have met.  Paul is upper-class, and he is engaged to marry a childhood friend.  He and his parents, she and her parents, and the Nevins (played by Firth and Colman) are scheduled for a lunch the day before the wedding.

The story can only be understood in the context of a time and place when class divisions were strictly maintained; for instance in today’s world it is likely that Paul would rebel against the social order, refuse to marry his betrothed, and run off with Jane, with whom he is in love.  But not then; it’s apparent even in the conversations between Jane and both of the Nevins that a prescribed social distance is maintained, and that Paul is well socialized to conform to expected social norms.

It is clear that the story, based on a novel by Graham Swift, is about class relationships, although, unfortunately, that is not addressed specifically.  All the characters—except for the snippy bride-to-be, whom we meet only briefly—seem to accept the social order and are not inclined to question it.  I wish the film had addressed this more specifically, along with more about the background of the main characters.  Jane’s history is spelled out, but only a brief reference to the importance of picnics in Paul’s family is mentioned.  Three of the close-knit families had lost sons in the war, and it is obvious they are still grieving, but we only learn that incidentally.  There are only brief spurts of bitterness expressed by the Olivia Colman character, and it is only after some time we learn why she behaves as she does.

Odessa Young, who carries most of the film, is beautiful to watch, both physically and observe her acting talent and skill, which has drawn much praise from her native Australia.  I hope I will be seeing her in future productions.  Josh O’Connor is in a less appealing role but lives up to his fame in portraying Prince Charles in television’s “The Crown.”  As always, I enjoyed Firth’s performance; his acting is so eloquent, he enriches every scene he’s in, conveying underlying turmoil while maintaining outward aplomb.  Olivia Colman epitomizes the bitter (as in The Lost Daughter) and grieving mother who has lost her son on the battlefield.

Cinematography by Jamie Ramsay is artistic in portraying love scenes with novel sequences and in certain reflections, such as a blood stain reflected on a wallpaper pattern.  Music by Morgan Kibby is exquisite in capturing the period with lovely piano music and then with more modern-age dissonance during distressing scenes.  Director Eva Husson has put all the elements together for a moving, engaging story.

I have to complain about two characteristics which are unfortunately not unique to this film.  One is the constant scenes of cigarettes that make it obvious they’ve paid for a good part of the picture.  The other is the mixing up of times so one must figure out the time frame.  Why can’t filmmakers film their stories in chronological order?  I don’t mind a bit of reckoning back but jumbling up time frames is getting to be so annoying.

Mothering Sunday is about an unusual Mother’s Day in 1924 when WWI is still fresh in the minds of British people and the social order still influences people’s behaviors and relationships.