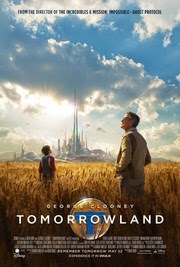 Hold onto your hats.  Tomorrowland is a wild ride across space and time and with some of the fanciest futuristic gadgets you could imagine.  It’s a modern-day fairy tale.  Special effects abound, coming from Director Brad Bird’s playful imagination, and, with co-writers Damon Lindelof and Jeff Jensen, an exciting and meaningful script.  It’s a bit slow to get started with scientist Frank Walker (Clooney) trying to introduce it and sidekick Casey (Robertson) continually interrupting.  He does manage to get across that the film will be addressing a future that can be scary at times…ah…Tomorrowland.
Next, there is an interlude that seems not to fit, but will make sense later.  It’s about a young boy named Frank (Robinson) trekking to the 1964 World’s Fair lugging a jet pack he has invented in a canvas bag.  He plops it down in front of a man at a conference table, Nix (Laurie), who is skeptical and probes Frank with questions about it,  eventually discouraging the boy and sending him away.  A young girl appears about this time and befriends Frank, giving him a special pin that will give him some pretty fantastic adventures.  The viewer just doesn’t know what all this means yet.
The main part of the story begins with Casey as a precocious teenager whose father is an engineer at NASA and is just about to be laid off because the space program is getting cut back.  (It occurred to me that the movie is, perhaps, a pitch for the resumption of a more comprehensive U.S. space program.)  Casey tries to help her father by doing a little sabotage at the NASA demolition site in order to postpone as long as possible its demise and prolong her father’s job.  This brings her to the attention of a mysterious robot-girl, Athena, (Raffey Cassidy), who “recruits” her into a major effort to save the planet by planting in her belongings a mysterious pin that looks exactly like the one given to Frank.
When Casey touches the pin, she is transported instantly to another place.  This is exciting, but puzzling as well, of course; then she finds that people (really, robots) are pursuing her, some to do harm, but one, Athena, swears she is trying to help her.  It’s difficult for Athena to get Casey to follow her, partly because of Casey’s incessant questioning.  Finally, Athena dumps her off at Walker’s house; however, Walker wants nothing to do with her and slams the door in her face.  But Casey has gleaned enough information to arouse her curiosity, and she does everything she can to get inside the house and get Frank to show her whatever Athena was telling her about.
When she does manage it, exasperating Frank, she finds his house is truly a wonder to behold with all kinds of monitors, cameras, scientific equipment, and booby traps (traps for relentless pursuers).  From this time forward, we’re treated to major space travel to another dimension, hair-raising brushes with robots in pursuit, and meeting up with a villain.  I especially like the manner in which the film respects children, showing their natural affinity for electronics, and the importance of adults listening to their dreams.  It’s also an exhortation to go toward the light and hope rather than lapsing into darkness and despair.
All this is not just in fun; the film has a serious message about the trouble our planet is in, and the critical need for all of us to do whatever we can to save it.  Will it foster motivation in that direction?  I hope so!  I think it will go over the heads of very young kids—not only in terms of this message, but also in figuring out what’s going on in the story.  A child (sounding like age three or four, kept asking his mother, “What happened?”  “What was that?”  So I recommend Tomorrowland only for children from seven to nine up.

A fantastical journey across time and space.