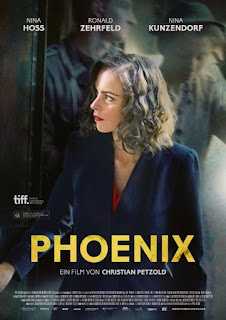 A story of betrayal, blind trust and denouement, Phoenix will pull you in and keep you engaged throughout.  It starts out mysteriously with two women in a car, one driving and the other in head bandages so only her eyes show.  We learn that Nelly (Hoss), who got plastic surgery after facial disfigurement in the Nazi concentration camp, asked specifically to have her previous look preserved as much as possible, even when she was given the opportunity to take on a new identity and a new life.  Her companion is taken aback by this; Lene (Kunzendorf) is solicitous and clearly cares about Nelly and wants to talk about a new life in Palestine.
But Nelly has something else in mind, which is to try to recapture her “old” life; she wants to reconnect with her husband Johnny (Zehrfeld).  She was a singer in a club in Berlin when the Nazis arrested her for being a Jew.  So she returns to the club in search of Johnny.  She still has black eyes from the surgery, and her appearance is altered to some extent, so when Johnny (Zehrfeld) sees her at the club, he doesn’t recognize her; however, he realizes she is similar enough to his wife that she could get the missing woman’s inheritance, and he would give her a cut in the deal.
Nelly decides to go along with the plan, hoping Johnny will ultimately recognize her, but she doesn’t have all the facts, and therein lies the intrigue and value of this tale.  It touches on the German people’s wanting to whitewash their involvement in what happened in the war (as illustrated by Johnny’s telling Nelly not to worry about looking like her old attractive self; no one will want to ask her about her real experience in the concentration camp, such as disfigurement and a tattoo on her forearm); people’s tendency to resist change and want to hold onto the past (as illustrated by Nelly’s naïve belief that she could return to her old life); and the effects of betrayal, which are unpredictable and uncontrollable by another person (as illustrated by Lene’s decisions).
This beautifully rendered film by Christian Petzold (Barbara, Jerichow) has depth and provokes questions that could be discussed long after Phoenix is seen.  What if Nelly had listened to Lene and moved on to Palestine?  What was the ultimate fate of Nelly and Johnny (because the ending was ambiguous)?  Why wouldn’t her German friends wonder about Nelly’s apparent avoidance of horrors in the concentration camp?  Why wouldn’t they ask about a tattoo?  Is it love or something else that propels one back to a seemingly doomed relationship?
Nina Hoss and Ronald Zehrfeld are regulars in Petzold’s films, and are perfectly cast in this film and perform their roles admirably in Phoenix.  Petzold keeps the film nuanced and paced so the full story comes out gradually, and to top it off, the ending is perfect.

A bit of mystery about two people post WWII with larger implications.