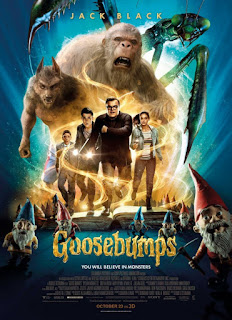 Even after answering questions from various groups for three hours before, the main cast members (Jack Black, Dylan Minnette, Odeya Rush, and Ryan Lee) of Goosebumps were fresh and lively for their press conference.  In a dramatic entrance, Dylan was singing as they filed in, and Jack announced that he had ordered Tex-Mex to eat for when they go on their way to the next junket point.  Of course, the cuisine had to be explained to someone like Odeya who is from Israel.
A burning question for all eight critics/reporters present was about R. L. Stine, the author of the Goosebumps books (62 of them, no less!), and his take on the movie.  Jack said he met Stine before shooting the picture, and found that the author is nothing like the character Jack plays.  He called Stine “an amazing guy” and a brilliant writer—which Jack tried to keep in mind when he was playing him.  Jack said the character in the movie is a very dark figure, with sinister and antisocial qualities, which couldn’t be further from Stine himself (or the actor himself, I’ve observed).
Stine actually loves the film and had no objections to the portrayal of him.  He was more interested in seeing that the filmmakers were mindful of Stine’s audience and that it had equal parts of scariness and fun, which is how he wants his monsters to be seen by children. Stine’s positive opinion about the movie was “like gold” to Jack.
Jack and the three younger actors had high praise for one another in their working relationships.  Odeya said that Jack puts everyone at ease because he’s so approachable.  Ryan said he grew up watching Jack’s movies, and recalled seeing him after a press junket for Super 8, when he never dreamed he would get to work with him in the future.  Jack complimented the three younger actors for their skill and “realness.”  He and Director Letterman felt lucky to get them because a) each was their first choice out of hundreds of auditions and b) they were so much in demand on other projects.
There was an interesting question about working with the computer-generated monsters.  Jack explained that the director sets the scene for the actors with verbal descriptions and they act out their parts as if the fantasy character were there.  For instance, in the scene where Jack encounters The Blob, he is standing on a table and moving about as if he were in a bowl of Jello.  Computer-generated images are always added in at a later time.  In the Production Notes, Letterman says that whenever possible they created a material creature out of make-up and special effects.  Most of the monsters are material or a hybrid of material and CGI, and a few are purely CGI.
Which of the monsters is the scariest to the actors?  It was generally agreed that Slappy is; he’s a little like Chucky of the Chucky horror movie series.  Jack pointed out that he has the power of teleportation, but is also like Hannibal Lector or Darth Vader because he’s the sinister mastermind.  He represents the darkest part of Stine’s psyche.  Although Avery Lee Jones was the puppeteer/ventriloquist on set, the voice was subsequently replaced with Jack’s.
Since Jack Black has two seven and nine year-old boys, I asked about whether they had read the Stine books, and he replied that they hadn’t, although they do like scary stuff and have an app on their iPad that shows creepy things.  When they were younger, he used to make up stories for them at bedtime, such as his own version of Lord of the Rings, with adventures involving Hobbits and dragons.  He always left them with a cliffhanger, e.g.,           “Tomorrow, you’ll find out what happened with the Dragon of Algernon!”
He was certain when he read the script that his children would enjoy Goosebumps, so they received a special screening at their school in Los Angeles (not the School of Rock, as someone suggested).
The last scene of Goosebumps leaves the impression of a sequel to come, which Jack said depended on how well this movie fares and how good the script for the next one might be.


Everyone seemed to leave the conference on an upbeat note, inspired by the actors’ enthusiasm for the film and their fruitful collaboration.  I, for one, think it will be a hit as a Halloween movie this year.  Right now, I’m wanting to see it again! 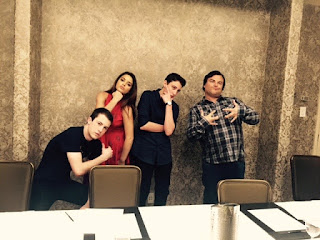 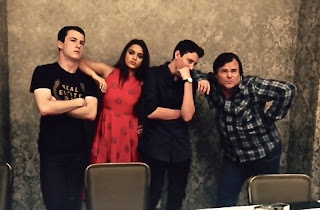 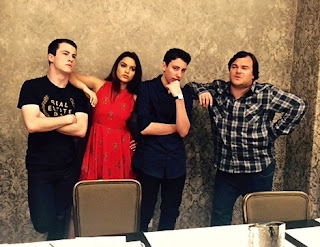 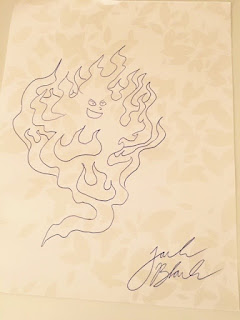 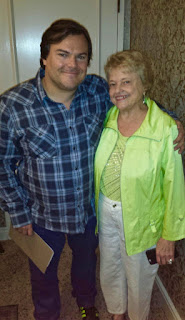 Posted by donnarcopeland at 3:20 PM