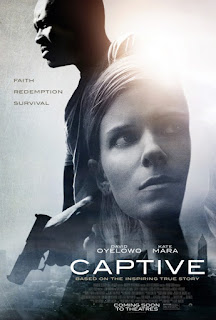 Captive, a really tight, tense thriller, portrays the desperation of an inmate frustrated about being locked up for so long for something he did not do.  (The film leaves unclear whether he is right or not, but seems to imply that he is correct.)  Brian Nichols (Oyelowo) decides to take matters into his own hands when he finds out he has a newly born son.  So he breaks out of a courthouse jail leaving a heartbreaking mess behind him, and ending up at Ashley Smith’s (Mara) house, holding her captive.  Ashley is trying to get her life back in order so she can reclaim her daughter who has been taken away from her, deemed as unfit to be a mother, so this is a very inconvenient time, aside from the fear and anxiety it produces.
Most of the drama—based on a true story written about in a memoir by the actual Ashley Smith, Unlikely Angel—takes place in her house where a relationship develops between her and the escapee.  Ashley is even more terrified because Brian was serving time for a vicious rape, which she knows about because his escape is breaking news on TV.  He binds together her hands initially and her hands and feet later on, but as time goes on and they share some of their back-stories, a certain amount of trust develops.  Interestingly, they both go through periods of soul-searching, especially when talking about children and their own childhoods, and when she reads excerpts from a book she had previously rejected, The Purpose Driven Life—a Christian based book written by Rick Warren and blessed by Oprah Winfrey.  Their interaction goes on through the night, and by morning she is fixing him breakfast.
A deadline is approaching; she has promised to attend her daughter’s program at school at 9:30 am.  It’s critical that she make it, and David feels torn, given his new feelings about parental responsibility.  He appreciates her need to go; but will he figure out a way to assure his own safety in the meantime if she does?
The book and film on which this story is based is from a Christian point of view, with a quote from the Bible: “…but where sin abounded, grace did much more abound” (Romans 5:20), which indicates the overarching principle behind it.  I appreciated it for its presentation of three-dimensional characters, and its picture of human beings in whole.  People are so much more than one aspect of their reputation.  It also shows how relationships are a process over time; that people can and do change.
David Oyelowo, one of filmdom’s most talented actors, delivers here, and is to be praised for taking the role of the apparent bad guy.  He and Kata Mara give very nuanced renditions of people in the hostage circumstance.  Although this is a religiously based work, Jerry Jameson, the director, and perhaps the writers (Brian Bird and Ashley Smith) as well, use restraint from that standpoint, and have composed a work that is more humanly dramatic than anything else.

A film with grace in the midst of human failings.


Posted by donnarcopeland at 11:42 AM