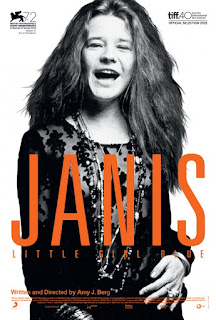 The seventh annual Houston Cinema Arts Festival opened with a winner, the premiere of the documentary, Janis:  Little Girl Blue, directed by Amy Berg and produced by Alex Gibney.  Janis Joplin from Port Arthur, Texas, was a rock star in the ‘60s, who could shock others with her talent as well as her sassy personality.  The documentary lends a full picture of the artist and the person; the artist as incredibly talented and driven and the person as someone who was misunderstood her whole life by many (although not by those who really knew her).  I kept thinking of Bob Dylan’s song, “Just like a Woman” (“She aches just like a woman, but she breaks like a little girl”).  Janis was complex—very intelligent in her charisma, creative in her lifestyle and in her work, suffering from rejection from the time she was young and took unpopular stands (such as for integration in the Civil Rights era), and still warm, caring, and sincere.  She retained a child-like naïveté throughout her short life.  Yet, I’m sure she exhausted anyone who got close to her with the force of her energy and will.
It was fortuitous that Janis’ father suggested to his wife before she got pregnant with Janis, “Let’s do something for prosperity.”  This happened, but not in a way that he ever imagined.  And Janis’ early life would not suggest that she could ever achieve what she did.  She was teased unmercifully in school because she didn’t fit the mold of girls in the ‘50s; and when she came out for integration, she was literally targeted by the Ku Klux Klan.  Even later, when she moved to California, a fraternity ran her for “ugliest man” and she won.  Her childhood friend, Dave Moriarty, says this time  it pained her so much she wept.
But by virtue of her talent—and perhaps as well the force of her personality—Janis found success.  Her first band, the Big Brother Holding Company (BBHC), brought her to fame, most notably at the Monterey Pop Festival where she received a long standing ovation, but they were also what she needed in terms of fatherly figures who provided guidance.  Her career exploded when the group signed with Columbia Records and had a gold album.  But then, her fame created friction within BBHC, and she went with a series of groups after that.  By this time, she was injecting heroin, which affected her performance at Woodstock, although she still won acclaim there.
Amy Berg’s film is a valuable account of an unlikely heroine who overcame incredible odds to achieve fame and some fortune.  It gives us a fleshed-out picture of the artist as well as the person revealed in her letters; interviews with family, lifelong friends, and lovers; and recording sessions and concerts.  Berg achieved a wonderful balance between biography and music, and in the discussion session post screening said that she hoped people would come to know Janis better from listening to her music as much as her biography.  She won applause at the end of the discussion when she said she wanted to counteract the tendency to regard female rock stars differently from males.  That is, when people like Jimi Hendrix are talked about now, it’s about their accomplishments, whereas with Janis and Amy Winehouse, for instance, the subject is more about overdosing on drugs.
The emphasis on letters Janis wrote to capture some of her personality was a wise choice, as well as the film being narrated by Cat Power, whose voice resembles Janis’ so much even Cat’s band members heard the voice of Janis during Cat’s readings in the film.

An enlightening account of the life and person of an artist:  Janis Joplin

Posted by donnarcopeland at 10:40 PM