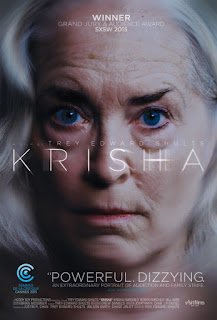 Writer/director/producer of Krisha, Trey Edward Shults, was awarded the Levantine Cinema Arts Emerging Artist Award at the screening I attended of his film in Houston, Texas.  An earlier version of Krisha won the Grand Jury and Audience awards for Best Narrative Feature at the SXSW Film Festival in Austin last year, and the revised version was nominated for awards this year at the Cannes Film Festival.
It is a most unusual film in that it’s a drama created by Trey about a family—with his own family members as actors.  A first, maybe?  Basically, it’s about a disturbed older woman thinking she is ready to celebrate Thanksgiving with them, after she has previously alienated them with her addictive problems.  But she is thinking she has mastered these and is ready to face her family again.  The film opens with Krisha (Krisha) arriving at her sister’s (Robyn) house looking a bit addled (she first rings the doorbell of the house next door), but telling herself she can do this.  She has insisted that she stuff and bake the turkey which Robyn is happy for her to do and provides her with all the ingredients, while Robyn fetches their mother from a nursing home.
But it’s soon obvious that Krisha is having a difficult time (re-entering with family is the biggest challenge for someone in her shoes), and you wonder/worry about how she is going to cope.  She has a very awkward interchange with her college-age nephew Trey (Shults), who ends up leaving the room abruptly when she comes on too strong and misjudges his attitudes about his goals in life.
This is high drama, and the viewer must be able to tolerate/appreciate the significant amount of dysfunction that is portrayed.  But some of it is clever and laughable—such as brother-in-law Doyle (Bill Wise) complaining to Krisha about his marriage to her sister Vickie (Victoria Fairchild).  Even this, however, turns into a bitter attack on Krisha herself.  Krisha attempts to use the coping strategies she has learned, but ends up resorting to old habits after a fateful encounter with her mother and the profound feeling of being completely alone and rejected.
The film ends with intentionally ambiguous outcomes, so the viewer can fill in his/her own projections of Krisha’s outcome.
At the Q&A, we learned that the real Krisha is a “voice” actress (i.e., only her voice is recorded in productions) who aspired to be a full-fledged professional, but when she ran into difficulties, abandoned her goals and is happy to do what she does—acting with her voice only.  Trey lived with her for a time when she was in Hawaii, and that is when he conceived of the idea to write a role for her.  He engaged the actors Bill Wise and Chris Doubek (both of whom contribute to the comedy in the drama) by e-mail, and they agreed to play the husbands of two of the three sisters.  The cast acknowledged that the film is based on the script as well as improvisations (“unscripted content”, a term Wise prefers).
Music by Brian McOmber is appropriately modernist, enhancing our impression of Krisha’s state of mind at significant moments.  Drew Daniels’ cinematography is likewise artistic and well composed.

This is a film for the stout of heart in witnessing a family’s underside.