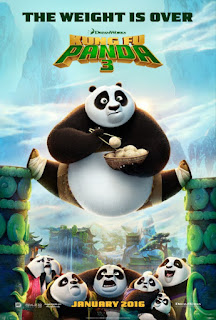 Kung Fu Panda 3 has the qualities we hope for in animated children’s movies:  A sense of adventure, good modeling by the adults, fine animation, humor, and a minimum of fart and pee jokes.  Many of the actors and crew have been involved in all three of the Kung Fu Panda films, which contributes to their quality.

In this adventure, Po the Panda (Black) is being prepared by his guide Shifu (Hoffman) to take over his role as teacher, which seems incredulous to Po who frequently bumbles his action moves.  But the message from Shifu is not to be like him, Shifu, but to find and bring out the Po that is his potential.  In this episode two important events take place; Po encounters his real father (Cranston)—currently filling that role is a goose, Mr. Ping (Hong)—and is charged with saving all the Pandas who are threatened by the evil Kai (Simmons), who has stolen the Chi of most of the past Masters and changed them to be his jade fighters.
The writers Jonathan Aibel and Glenn Berger weave together a story that contains elements of suspense and adventure, Po’s struggles to actualize himself, and warm family elements with Po coming to realize he has two fathers and a role in his extended family of pandas.  Directors Carloni and Yuh keep the action tight but make it easy for very young ones in the audience to follow.
The gifted cast skillfully transforms the script into fine entertainment for children, helped along by the colorful and entertaining animation, the musical score of Hans Zimmer and the production design of Raymond Zebach.

The latest edition of Kung Fu Panda keeps up the fine pace of the previous two productions.

Posted by donnarcopeland at 7:53 PM